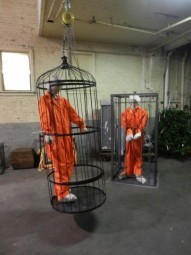 "We are approved for educational seminars," says Kriegesmann, who is also known as "Satan's Master." He tells us he received a letter from the Board of Public Service giving him the go-ahead to operate the club, which mayoral spokeswoman Kara Bowlin confirms.

Kriegesmann has been working to get the club operating within the strictures of every applicable city law, but it hasn't been easy figuring out just what those laws are. As we reported back in May, Kriegesmann obtained a business permit and an occupancy permit, which he thought were sufficient.

But it turns out the city had more hoops for him to jump through. On July 28, Kriegesmann went before a three-member city panel to answer more questions about The Facility.

Alderman Craig Schmid, in whose district The Facility sits, had told Daily RFT in May that his reservations about the space weren't about kink, but public safety. At the July hearing, though, he seemed to switch gears. "Ostensibly, the application is for educational seminars," he said at the hearing. "But I cannot reasonably ignore what is the actual use of the facilities."