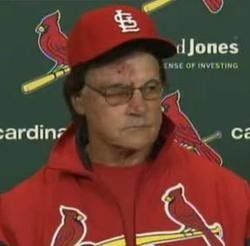 "We've had four months where this club was admired by everyone in baseball," he said. "(But) now we've had a period where we've been mugging (it up). But I think it's very important for our club and our organization to finish as we started."

"(We need) people seeing us competing at a high level (again)," said La Russa. "That means guys who play the best and pitch the best, play the most."