Poll: Would You Pork this Pig to Escape a DUI? 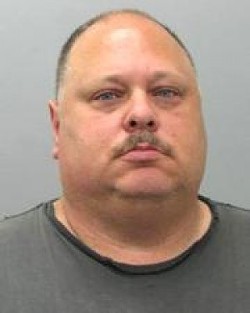 We all know that a drunk driving charge can be an enormous pain in the ass, costing thousands of dollars in legal fees and the temporary loss of your driver's licensing.

But is it really worse than having unwanted sex with this guy?

Yesterday St. Louis County prosecutors charged 48-year-old Timothy Jones with acceding to corruption by a public servant. As the Post-Dispatch details, Jones was working as a Country Club Hills police officer last November when he pulled over a 24-year-old woman on Interstate 70 for suspicion of drunk driving. After the woman performed a field sobriety test, Jones allegedly propositioned her with the offer: Get a DUI or let me have sex with you.

The two then went to the woman's home where they engaged in several sexual acts, according to court documents. Jones' superiors found out about the incident when other officers found the woman's cell phone in Jones' patrol car and used it call her mom, who relayed what had happened to her daughter. Jones remained employed with the department until a few months ago, pending an internal investigation.

So, that's the story. But it still doesn't answer the bigger question: Ladies (or men) would you have sex with Jones to get out of a DUI?

Cast your vote below or use the comment section to tell us what it would take on Jones' part or yours to prostitute yourself out of trouble.