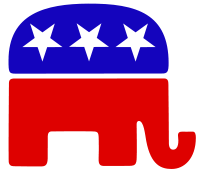 None of the Republican candidates have dropped by Missouri to stump and shake hands yet. So any poll claiming to gauge Missouri voter sentiment should be consumed skeptically, at best, and laughably, at worst.

But the current Republican primary race is one of the most entertaining in recent memory. More than that, it will likely end up as a referendum on the Tea Party wave of the midterms and will possibly set the party's path for the next decade or so. Campaign season is fully baked. And Missouri will hold one of the earlier primaries, either on February 7 or, if SB 282 passes in the upcoming special session, March 6. So the state's polling is worth noting.

Here's how the rest of the poll shook out:

Michele Bachmann comfortably held down third place with thirteen percent. Newt Gingrich, Herman Cain and Ron Paul took the next three slots with seven, six and five percent, respectively. Tim Pawlenty (who has since dropped out), Rick Santorum (who has since inexplicably focused his efforts on taking down Ron Paul), and Jon Huntsman (who has since remembered he is running for president) rounded out the bottom, with slightly (no more than three percent) more votes than the coffee mug on your desk.

Perhaps the most telling result, though, is that twenty percent of respondents remained undecided. This illustrates one (or a mix) of three possibilities: 1) A good chunk of Republican voters are unimpressed by the current field and are holding out for a Chris Christie or Paul Ryan. 2) A good chunk of Republican voters are waiting to see Perry and Romney duke it out for a few weeks/months before leaning one way or the other. 3) It is ridiculously early to be polling voters in a state not called Iowa, New Hampshire, South Carolina, Nevada or Florida.

If the race comes down to Good Ol' Boy Perry versus Country Club Conservative Romney, the Midwest vote will probably swing the election. In the days since the Missouri poll was taken (August 10-11), Perry has surpassed Romney at the top of the national polls and Paul has surpassed Bachmann as the third wheel. Of course, whether Perry is simply riding a honeymoon-phase wave remains to be seen. It will be interesting to note whether Romney continues to try to slug it out with Perry and Bachmann on socially conservative issues. His stances on climate change, gay marriage, and the debt ceiling deal were noticeably more conservative than his rhetoric as governor of Massachusetts. Which leads to some questions: Did Romney really have to position himself in the Tea Party-Right? Could he not have controlled the narrative as the clear early front-runner? Is he underestimating the turnout of moderate and center-right voters?

With Perry taking the lead on the score cards, Romney may be forced to double-down on his strengths -- reasonableness, moderation and electability -- and better distinguish himself from the crowded pack on the far-right. However, the fact that Missouri voters threw Perry right into Romney's airspace immediately after he entered the election confirms the hackneyed theory that Republican voters are thirsty for a Romney alternative.

Plenty of time to adjust, though. It's the end of the third round, and Romney's cutman is icing down the bruise on his brow while his trainer shouts at him the new game plan.