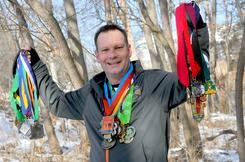 Last time Riverfront Times caught up with Todd Lewis was back in 2003, not long after he'd heard a motivational speech by former Notre Dame football coach Lou Holtz that inspired Lewis to come up with a list of life goals.

Eight years later, the 43-year-old salesman from Lafayette Square is pleased to report that he's knocked off 52 of his 134 objectives. One of those achievements, by the way, was meeting the legendary Holtz face-to-face, something Lewis says he's done four times now.

"I'll never forget the first time I heard him speak," he recalls. "I was sitting in a sales conference in Dallas and Lou starts talking about how he was never the smartest person or the best athlete, but he set up goals and made sure he accomplished them."

One of the first goals Lewis jotted down was his desire to run with the bulls in Pamplona. Lewis accomplished that mission three times. His website irunwithbulls.com chronicles his many feats, which have included running his first marathon (and following it up with dozens and dozens more), climbing Mt. Hood and visiting the Galapagos Islands.

Some goals are more difficult than others. Lewis tells Daily RFT that he knocked off the goal of "writing a poem" in a single afternoon. His quest to summit Mt. Everest took a month and he never made it past base camp, although he plans on returning in the next few years to finish the job.

His goal to meet Mark Cuban took multiple emails before the owner of the Dallas Mavericks agreed to meet him for ten minutes prior to a conference in Indianapolis. "I jumped in the car and drove to Indiana that night," says Lewis, who presented Cuban with their email exchange to prove that he wasn't just some random stalker. When meeting Holtz for the first time, Lewis gave the coach a baggie full of sand from Pamplona as a token of his appreciation.

Sure, some of his friends think Lewis is a bit crazy for his constant devotion to his goals. Others are somewhat jealous.

"I think my married friends see the travel and the fun, but they don't see the hard work it takes to reach my goals," he says.

Yes, Lewis is single. Blame the goals for that.

"I was in a pretty serious relationship before I started this," says Lewis. "But it's pretty hard to date someone when you're constantly traveling to accomplish the next goal."

Lewis' says his boss allows him to leave work for weeks at a time, provided he's meeting his sales objectives. He keeps his list of goals on a shelf in his bedroom closet where he's sure to see them each morning when he gets dressed.

But, you may wonder, what is the overall goal of Lewis' many feats? What do they lead to in the end?

"They force me to get out of my comfort zone," says Lewis. "I know I probably never would have run a marathon or traveled the world if not for my list. Other people can have completely different goals than mine. What's important, though, is that you write it down and then take that first step."