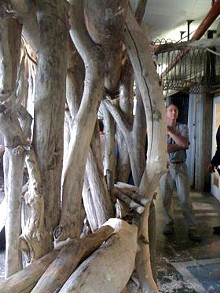 Since December 2010 Max Cassilly has been legally prohibited from entering one of St. Louis' most popular attractions: the City Museum, which is owned by his father, Bob Cassilly.

The younger Cassilly, 25, also is barred from his father's home.

The injunction keeping him away was obtained by Max's stepmother, Bob Cassilly's wife Giovanna. Giovanna Cassilly, who owns a clothing store at the City Museum, petitioned for an order of protection on December 10 of last year, alleging that her stepson had repeatedly threatened to kill her.

The order was granted in city court by Judge Robert A. Ward and remains in effect until December 21, 2011. It prohibits Max Cassilly from being within 100 feet of Giovanna Cassilly, her workplace, her car and the house she shares with his father.

Giovanna Cassilly believes the behavior that caused her to seek the protection of the court goes a long way toward explaining the violence that befell Max Cassilly earlier this month.

As Daily RFT first reported, Max Cassilly was shot repeatedly on August 13, when two armed men appeared on his doorstep in the 3600 block of Montana at 6:20 a.m. After his roommate let them into the apartment, the pair opened fire on Cassilly with automatic rifles, hitting him in the arms and legs.

A spokeswoman for the St. Louis Metropolitan Police Department initially informed Daily RFT that Cassilly knew his assailants, one of whom was captured soon after the shooting, and that detectives were attempting to establish a motive for the attack. In a subsequent statement, the police department announced that investigators are exploring robbery as a possible motive and that "there is much more" to the incident than initially believed.

Max Cassilly, who spent more than a week in an intensive-care unit, hasn't responded to Daily RFT's requests for comment. His father also hasn't returned our calls.

But earlier this week, Bob Cassilly granted an interview to the St. Louis Post-Dispatch. On August 24, in the Post's first and only story to date about the brutal attack, gossip columnist Deb Peterson quoted Cassilly as saying he doesn't think there was "any kind of a personal motive" and that the shooting was likely part of a robbery attempt. Peterson's story included a description of the shooting, its aftermath and the ongoing investigation, but no mention was made of Max Cassilly's history of disturbing behavior. "I'm a wreck," Cassilly told Peterson. "Max is all well and rested and I look like the one who has been shot."

The day after the Post published Peterson's story online, Giovanna Cassilly contacted Daily RFT, expressing frustration and disappointment that her husband had glossed over the problems in Max's personal life.

"I would like to say that Bob could have expressed himself a bit clearer and said, 'It's an ongoing investigation. It's a miracle that Max is alive, he's recovering. We hope this is a turning point for Max, that he can stop drinking and whatever else he's doing,'" Giovanna Cassilly says. She also wishes her husband had urged his son "to cooperate and tell the truth."

Max's mother, Gail Cassilly, says her son is on the mend, but is still in no condition to speak to police. She says Judge Ward's order of protection is old news and has nothing to do with the shooting and strongly objects to her son's stepmother speaking out.

"There's nothing to be printed here until the police conduct an investigation and deem that there is something newsworthy," Gail Cassilly tells Daily RFT. "This is just people talking now, and it's hurtful and it's not helping my son. In the meantime opinions, comments and stuff based not on fact are not appreciated and are not at all welcome."

Giovanna Cassilly says her only goal is to ensure her stepson gets the help he needs. "I didn't take [the voicemails] personally," she says. "It's a kid, [an] adult, crying out for help. I wanted him to get some help. Now is the time for the parents to be pressing for the truth of what his activities are. It's best for Max."

Giovanna Cassilly shared with Daily RFT a letter her attorney sent to Max and Gail Cassilly in May.

In his letter, attorney Sam J. Alton pointedly reminds Max Cassilly that the order of protection is still in force. Alton goes on to allege that a surveillance video captured the young man defying the injunction by sneaking into the City Museum after hours and bringing guests with him, and that Max sneaked into the Cassillys' loft in the museum -- violations that could be grounds for arrest.

"The multiple threats against [Giovanna Cassilly] are serious and, she fears, indicative of what may be a bigger problem involving addiction," Alton writes. "Giovanna is concerned with her safety; however, she is also concerned with the safety of other family members, including Max. It is our client's desire that those with influence over Max convince him to enter a drug addiction and/or rehabilitation program before his dangerous behavior escalates. No interested party wants this or any other unfortunate occurrence to happen to Max."