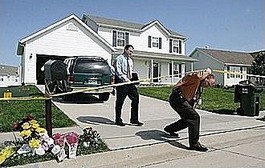 The home where Christopher Coleman strangled to death his wife and two young sons is back on the market.

The home was placed up for auction in the spring of 2010 and didn't get one bid at an asking price of over $250,000. This time the two story home in Columbia, Illinois, is being offered for a significant discount at $181,000.

The death threats Coleman spray painted on the walls to make it seem as though a stalker murdered his family are gone. And the home shows no signs of the triple slaying in May 2009.

The agent for the house, Jeb Blasingame with Star Realtors, tells the Belleville News-Democrat he hopes to sell it fast.

State law doesn't require that realtors disclose what happened in a home prior to its sale, but Blasingame says he'll tell potential buyers about its history. That said, he's meeting with his attorney this week for advice on how to broach the subject.

Should make for an interesting conversation.