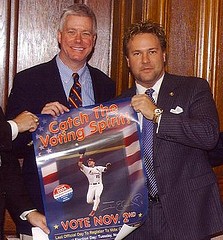 Here's an interesting follow-up to that story we first reported last week: David Barklage, the consultant to the Missouri Republican Party who owes more than a half-million dollars in back taxes, has also been working as a lobbyist on the Aerotropolis project.

That's the effort being pitched by the St. Louis Regional Chamber and Growth Association, or RCGA, to turn Lambert-St. Louis International Airport into a hub for Chinese freight. Governor Jay Nixon has now called for a special session to discuss giving $360 million in tax credits to the project. Basically, that means major tax cuts for privately owned, international "freight forwarders" who choose to do business at Lambert.

And so it's just a wee bit ironic that one key player in the tax credit push, Barklage, has shown little inclination to make good on his own tax bill.

After all, as the conservative Show-Me Institute concluded in a sharply critical report about the China Hub/Aerotropolis project,

Tax credits are not free money. Our state government is already straining to meet its current commitments. Every dollar that is given away in tax credits is a dollar that the state government must replace with cuts in current programs, or -- more likely -- through increased taxation. There is a long and dismal history illustrating the multiple failures of heavily subsidized commercial enterprises.

So who's lobbying to give away these tax cuts to some hand-chosen commercial enterprises? The very guy who's shown little inclination of paying his own taxes.

What makes the connection even more dubious is that the RCGA has shown little interest in clarifying Barklage's role on the project. We first reached out to its PR guy, Gary Broome, on Monday, asking him when Barklage began working on the project -- and whether there were any qualms about his participation in light of the tens of thousands of dollars in past-due taxes in Cape Girardeau County.

Broome responded later that day, but didn't address the tax issue whatsoever. He simply told us that Barklage was on a "professional services contract" to lobby for RCGA during the last legislative session, which wrapped up May 13.

That lines up with documents the Show-Me Institute obtained via a public records request, which show Barklage heavily involved with pushing for the project in March and April of 2011. But it doesn't square with Barklage's lobbyist disclosure statement on file with the Missouri Ethics Commission.

In that document, Barklage reports that he didn't even take on the "Regional Commerce & Growth Association" as a client until May 10, 2011 -- just three days before the end of the legislative session. (The name in that listing, we suspect, is a typo: It shares both initials and an address with the St. Louis Regional Chamber & Growth Association.) And despite what Broome implied, Barklage still shows it as an active client on his disclosure listing.

Interestingly, as we pushed for more answers yesterday, Barklage added a new client to his ethics commission listing: "St. Louis Regional Chamber & Growth Association." He reports being hired on August 23.

We can't say that for sure. (We've reached out to Broome four times for clarification in the last two days; we're no longer getting calls back.) But it definitely looks that way.

We never thought we'd find ourselves quoting Leona Helmsley, but really. If the freight forwarders don't have to pay their full share, and the lobbyist/Missouri GOP consultant David Barklage isn't making good on his share, well, is it only the little people who pay taxes anymore?