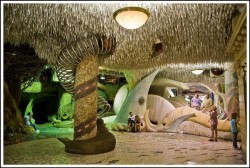 They came looking for Max Cassilly around 6:30 a.m. on Saturday, August 13. The men showed up at Cassilly's south-city apartment on Montana near Grand Avenue, asking for him by name. After Cassilly's roommate let them in, the men searched the apartment. When they found Cassilly, they shot him with automatic rifle blasts to the arms and legs.

Daily RFT obtained information about the shocking incident from the St. Louis Metropolitan Police Department. Those details about the incident come from a statement from police spokeswoman Erica Van Ross; Cassilly's identity comes from a police report we received through a Sunshine request.

Cassilly, 26, is the son of Bob Cassilly, founder of St. Louis' iconic City Museum. According to Van Ross, Cassilly knew the shooters.

Cassilly was able to run from the gunmen. Two witnesses called police, and Cassilly was taken to the hospital in critical but stable condition. Police arrested one suspect, John Henry Blake, 29, after they stopped the black Hummer he and the other suspect were fleeing in at I-55 and Bates. The other suspect was last seen running toward Bates.

Bob Cassilly hasn't returned messages from the RFT seeking comment. The police refused to tell us anything more about the case, including a possible motive for the attack. We've been unable to reach Max Cassilly, but sources tell us that new posts are appearing on his personal Facebook page.

According to court records, John Henry Blake has faced criminal charges for unlawful use of a weapon and criminal trespass in 2001.

After this post was initially published, we heard from a member of Max Cassilly's family, who wanted to convey in the strongest possible terms that the police spokeswoman's narrative does not fit what what the family has been told about the case. The family is convinced Cassilly did not know his attackers and was not a target.

The family notes that such details do not appear in the official police report and that they believe it's misinformation.

UPDATE: This post was changed at 5:42 p.m. to accurately reflect our source of information as well as include new information from Cassilly's family. See also our August 24 follow-up post for the latest news on the case.