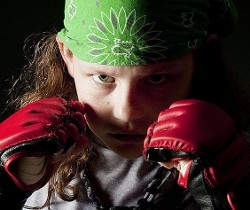 Back in March, we published a story announcing the arrival of Madeline Green, the twelve-year-old MMA scrapper raised by a single father, the legendary Mean Mike Green, who participated in the first amateur MMA fight in Missouri a decade ago. The article sparked a debate over whether it's appropriate for a father to encourage his daughter to pursue an ultimate-fighting career.

It's clear that Madeline "the Madness" Green has taken after her dad; we billed her as the toughest girl in Missouri when we wrote our story. After dominating her karate tournaments, Madeline made her debut cage debut with a kickboxing match in April -- a battle that ended with a draw. With her first-match jitters now behind her, she will step into the cage again on Saturday at the Stratford Inn, in Fenton. Since we profiled her, the twelve-year-old has grown four inches and put on eight pounds. But at four feet, ten inches, 82 pounds, she's still small; her challenger, Shyanne Mooney, has seven inches and eighteen pounds on her.

Her father will fight, too. Check out the promotional video after the jump.