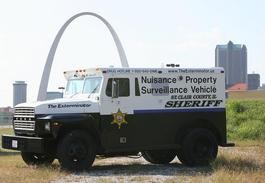 St. Louis is the latest city with plans to use a retired armored truck to crack down on people living in nuisance properties.

The Post-Dispatch reports that the police department acquired the vehicle for $10 from Brink's Inc., and the St. Louis Police Foundation, a non-profit, will pay $10,000 to outfit the vehicle with cameras, graffiti-repellent paint and puncture-proof tires.

Last fall St. Clair Sheriff's Department began placing a similar vehicle (called "The Exterminator") outside homes where drug dealing and other crimes are occurring. Sheriff Mearl Justus say citizens love the vehicle, which often leads to troublemakers moving out of the neighborhood.

The armored truck for St. Louis has yet to get a nickname. Police say the vehicle will be used in north city and possibly the Delmar Loop to deter crime. 'Cause you know, all "Great Streets of America" feature an armored car running surveillance.