Jon Jay and The Curse of a Starting Job 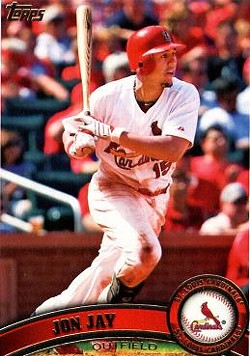 Last year at the trade deadline, the Cardinals got rid of one of their most productive, talented offensive players -- an outfielder -- in search of pitching help. They felt confident moving Ryan Ludwick in the three-team deal with the Cleveland Indians and San Diego Padres (who actually acquired Ludwick's services), largely thanks to the presence of Jon Jay. The organization felt Jay was capable of stepping into Ludwick's starting role and contributing to the team on a full-time basis.
This year at the trade deadline, the Cardinals traded away one of their most talented young player -- an outfielder -- in search of pitching help. They felt confident moving Colby Rasmus to the Toronto Blue Jays, largely thanks to the presence of Jon Jay. The club felt Jay was capable of stepping into Rasmus's starting role and outproducing the center fielder who had fallen out of favor with the coaching staff.
We all know how things worked out for Jon Jay in right field in 2010. Unfortunately, it's looking like things are going much the same for him in 2011 as well.
On the morning of the first of August, 2010, Jon Jay began his life as the Cardinals' starting right fielder with an OPS of .999. A line of .378/.427/.571 is certainly impressive from anyone, but the fact his on-base percentage was less than 50 points higher than his batting average should have raised a red flag. Apparently it did not.
From the first of August through the end of the season, Jay hit just .244/.309/.314, good for an OPS of .622. His already mediocre power completely disappeared, with just one home run in 193 plate appearances. His overall season OPS went all the way from that .999 figure to a final season total of .780.
Colby Rasmus was moved a few days before the trade deadline this year, dealt on the 27th of July. On that date, the day Jon Jay became the de facto starter in center field for the Cards, he boasted a robust .801 OPS. Not playing in quite the same stratosphere as he was last summer, but certainly not anything to sneeze at, particularly from a player manning a premium defensive position like center.
Since the trade, Jon Jay's batting line reads like so: .210/.234/.274. An OPS of .509. Oh, and just in case you think Jay is just experiencing the bite of the bad old BABIP bug, his batting average on balls in play during that time is .283. So, you know, not really lucky or unlucky. He has zero home runs, though he does have four doubles out of just thirteen hits. His strikeout to walk ratio is a miserable 16:2. It's been bad enough Corey Patterson has started to look like a viable alternative.
Okay, strike that. That's not fair. I didn't mean it. Corey Patterson is never a viable alternative.
[Today's theme song below. Please insert a question mark at the end of the song title.]

This isn't a post about trading Colby Rasmus. In fact, Rasmus has been pretty awful himself since going to Toronto. It isn't a post about trading Ryan Ludwick, either. This is about an ball club incapable of recognizing the true talent level of a player and separating it out from the numbers he's putting up at a given moment in time while being fueled by an unsustainably high BABIP. Jon Jay's plate discipline is terrible, his defense is average, and his power is below average. He's an ideal fourth outfielder, as he does most things pretty well and really only has walk rate as his sole glaring deficiency.
But two years in a row now Jay has chosen the exact moment he became a starter to suddenly regress, and I kind of doubt it's a coincidence. It could be a crisis of confidence, or the explanation may be much simpler. Maybe he should never have been put in the position to prove he's a really good bench player by failing in a starting role at all.
Is it possible Jay could turn it around? Sure. Weird things happen all the time, and Jon Jay putting together a solid run of offense isn't hard to imagine. He needs to, desperately, it the Cards hope to chase down a playoff spot. I'm not confident they can regardless of Jay's performance; after dropping last night's game to the Pirates -- that's the 3-11 in August Pirates, by the way -- the Cardinals now find themselves 6 games out of both the NL Central lead and the Wild Card. Still, having a productive center fielder at the top of the order would go a long way toward turning this offense back into something resembling the juggernaut we were all so excited about back in May.
You know, back when the Cards had Jon Jay on the bench and some other dude nobody liked out in center field.