For an attorney and Congressional hopeful, Ed Martin sure has a funky memory.

The Tea Party favorite can't seem to get his story straight when it comes to Jeanne Bergfeld, whom he fired from the St. Louis Board of Election Commissioners in 2005. Was she competent or not? Six years after her termination, that question has become a political liability for Martin: Bergfeld is suing him for making disparaging comments about her to the Riverfront Times last year.

In response to Bergfeld's lawsuit, Martin first denied making the comments in question. Then, in a recent deposition, he claimed he simply couldn't remember either way.

That confusion may be real. What's more troubling is this: Martin's former campaign spokeswoman now suggests that Martin tried to bully her into changing her version of events in order to back up his own.

It's time to set the record straight.

In 2005, Martin took the helm as chairman of the infamously dysfunctional board. Even Democrats give him props for turning that ship around.

Martin and fellow commissioners Clarence Dula and Angel McCormick Franks wrote near-identical letters to a half-dozen employees at the board on August 12, 2005, informing them that their performance just wasn't cutting the mustard.

While the message was uniform, discipline was not: Four employees were reassigned, while two were canned outright -- including the long-time assistant director of operations, Jeanne Bergfeld.

Bergfeld became convinced the real reason the commissioners booted her off the bi-partisan board was their desire to please conservative governor Matt Blunt. (While herself a Republican, she suspected she "wasn't Republican enough" for Blunt.) She filed a federal lawsuit against the commissioners to that effect in 2006.

In settling that case, Martin and his colleagues signed a statement that backpedaled sharply on their earlier criticism, stating:


Jeanne Bergfeld served the Board of Election Commissioners for the City of St. Louis over a twelve-year period as a conscientious and dedicated professional. Ms. Bergfeld's departure from the Board arose from perceived differences on the best methods and organizational systems to meet new election requirements mandated by federal and state law. Any implication to the contrary is not accurate.

Martin and crew also agreed, in writing, to not talk about the case or disparage Bergfeld publicly.

That should've been the end of it. But it wasn't. 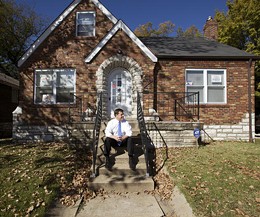 Last fall, RFT contacted Ed Martin during his underdog crusade to unseat Congressman Russ Carnahan. We wanted to write a long profile on him, provided we could have lots of on-the-record access. He agreed.

Over the next several weeks, we shadowed him at various campaign events. We also engaged in a few long interviews in his south-city office, which were digitally recorded with his full knowledge. (On occasion, he would get a sensitive campaign phone call and ask us to switch off the device, but 99 percent of the time, the "tape" was rolling.)

One topic we discussed on the record was Jeanne Bergfeld's lawsuit, because we weren't sure how the matter had been resolved. Here's what made it into the story:


Martin denies [that he fired Bergfeld for not being Republican enough]. "She said she was a Republican; nobody ever questioned that," he tells RFT, adding that Bergfeld was a patronage employee who had enjoyed "twelve years of not having to do anything" and who "wasn't interested in changing."

Martin concludes: "We did everything we could, appropriately, to have her do her job, but it wasn't in the cards."

When Bergfeld read these comments, she was incredulous. On October 22, the day after our story hit newstands, she sued Martin -- again -- this time for not respecting the terms of their settlement.

By that point, Martin was trying to put out a different fire altogether. An independent website had suddenly appeared, alleging that he'd known about clergy sex abuse in the Archdiocese of St. Louis while he was employed there, but failed to act.

It was a much nastier (and sexier) accusation. The buzz grew so loud that Martin decided to hold a press conference to deny the claims. Just minutes before that press conference, he found out about the Bergfeld lawsuit.

According to a statement given to RFT last week by Theresa Petry, Martin's former campaign spokeswoman and press secretary, here's what happened next:


After the conference Ed pulled me out of earshot from everyone and asked me [to confirm his recollection that] the RFT reporter had divulged statements made by Jeanne and that only then did he comment. I told Ed I wasn't in the meeting he had with the RFT that day, and therefore did not know. That is when Ed looked at me with a stern, serious face and in a firm tone told me that that was indeed what happened.

Given the delivery of his comment, in my opinion, he was implying he expected me to go along with it and back him up in his statement. I didn't say anything at the time, but knew I would tell the truth.

I may have questioned a lot of things I had to write and put my name on while working for the campaign but I refuse to just stand by while someone, in this case a good, fair reporter, is unfairly called into question.

Petry, for the record, left Martin's campaign on bad terms: She claimed, then as now, that Martin still hasn't paid her $8,500 for months of work.

But she insists her motives have nothing to do with revenge.

She e-mailed us the above statement only after we solicited it. "Trust me," she concluded, "it would be much easier to turn a blind eye, leave that experience far behind me and not stand up; but I have to live with my conscience and do what is right."

But Martin has responded to Bergfeld's complaint. On February 25, Martin filed a pleading in which he flatly denied making any comments about Bergfeld to the RFT.

His story shifted in June, when he was deposed (or more accurately, grilled) by Bergfeld's attorney, Chet Pleban. No fewer than fourteen different times, Martin said he could not remember what, if anything, he told us about her.

Pleban asked Martin why he'd never called RFT to demand a retraction. Martin responded that he referred the matter to his lawyer once the suit was filed, pointing out that Pleban could've phoned the candidate to signal his displeasure.

Instead, Martin said, Pleban chose to summons reporters to this law firm to announce he was filing a lawsuit against Martin -- and this, in the final 10 days of a heated campaign.

But Martin did concede in the deposition that, if indeed RFT had quoted him accurately, his remarks would have both been false and constituted a breach of the settlement.

Pleban, Bergfeld's attorney, has subpoenaed our digital recording of the interview we conducted with Martin on Sept. 10, 2010 -- the day we talked about Bergfeld. We're resisting that request, because we always resist subpoenas on principle.

Pleban has also asked for all of our notes and recordings from our time with Martin; we believe that's a fishing expedition, and our lawyers intend to fight it vigorously.

But the conversation in question was on the record, and we stand by our story: We quoted Martin accurately. The following soundbites, listed in chronological order, back up our quotes:


We appreciate Martin's transparency during the reporting process. He did not have to grant us broad, on-the-record access for our profile, but he did. It's a courageous choice for any political candidate.

However, he has called our reporting into question. We feel it necessary to support the quotes we attributed to him.