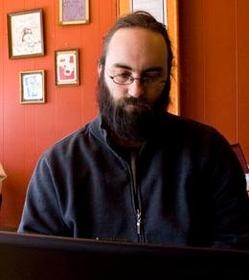 Shriver, a doctoral student at Washington University, has been trying to debate Breitbart for weeks about his coverage of the Kenneth Gladney "beating" and the doctored videos of two University of Missouri professors that Breitbart aired on his website.

Breitbart was exiting a side door at this weekend's conference when Shriver caught up with him, cameras rolling. The following clip is a bit hard to follow, though Shriver has a detailed account of the talking points on his blog St. Louis Activist Hub.

What is easy to discern, however, comes early on when Breitbart tells the yapping Dana Loesch (who serves as the editor of his Big Journalism blog) to kindly shut the 'eff up.