Michael Gordon: Pretended To Be a Cop To Pick Up Women 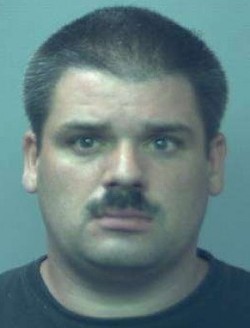 By day he was a self-employed handyman living with his mother. By night, police say, Michael Gordon was a make-believe cop, using his faux occupation to impress women in bars. The handcuffs and other police equipment Gordon carried on his utility belt would later prove handy during one-night stands at hotel rooms.

The 32-year-old Gordon's double identity came to a crashing end Tuesday following a meth lab bust in St. Charles County. The suspects arrested in the raid asked sheriff deputies if they could speak to their cop friend, Michael Gordon.

But deputies soon grew suspicious of Gordon and got on the phone to ask him exactly where he was a cop. Gordon said he was employed with the Pine Lawn department in north St. Louis County. That was a lie. Gordon has never been a police officer. A reading disability kept him from being a real cop, though he'd dreamed of the occupation ever since participating in the Police Explorer program as a teen.

According to the St. Louis County Sheriff's Department, Gordon went on to tell investigators how he pretended to be a cop to gain the trust of women he met in St. Charles County and Jefferson County bars. And who knew? Such a strategy actually worked! Gordon told investigators he took a few women to area hotel rooms for consensual sex with his police tools proving to be fun sex toys.

But was the sex really consensual? That's what the sheriff's department wants to know. It's publicizing Gordon's tale to make sure that none of his sexual conquests felt victimized and were afraid to report it because they believed him to be a real cop. Anyone in such a situation should call the St. Charles County Detective Bureau at 636-949-3020.

Gordon is charged with two counts of impersonating an officer. He was being held in jail yesterday on a $15,000 bond.