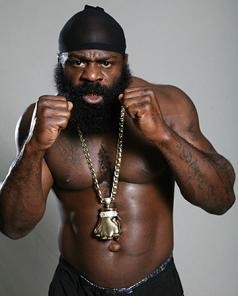 Kimbo Slice made a name for himself knocking out opponents in backyard boxing matches broadcast on the Internet. Given his impressive clips as a brawler, many thought Slice (real name Kevin Ferguson) would be a natural for mixed-martial arts.

But Slice never did cut it in MMA, with opponents better skilled in kick-boxing and judo knocking out his legs and wrestling him to the floor for victories. Now the 37-year-old Slice is returning to his roots, making his professional boxing debut tomorrow in a an Oklahoma casino. He'll face James Wade, a 39-year-old dad from St. Charles who holds a professional record of 0-1.

So, who is James Wade? And how did he get picked to fight Slice?

This afternoon Daily RFT caught up with Wade as he cooled his heels in the casino hotel room. Here's what he had to say:

Daily RFT: So, a lot of people are calling you the sacrificial lamb to be thrown into the lion's den tomorrow. Do you see it that way?

James Wade: I realize I was chosen for a reason, but at same time I'm not taking this lightly and believe I have the strategy and skill to pull it off. I'm planning to move a lot and throw straight punches.

How did you get involved in the fight?

I heard they were looking for an opponent, and one of my friends and trainers put my name in. After a bit of a wait, I was chosen.

You're 0-1 as a professional and no spring chicken. Why are you just now getting started in boxing?

I started out boxing in the Army and then did amateur boxing from around 1993 to 2001. Then I switched to MMA. I'm a jiu-jitsu instructor in St. Peters with Grappling Concepts. So, that's my real strong suit. But I'm always up for a challenge, and I've felt a calling to get back to boxing.

Kimbo is listed at six-foot-two-inches and around 230 pounds. How big are you?

I'm fairly small for a heavyweight. I'm five-foot-eleven and 205 pounds.

You've seen some of Kimbo Slices backyard boxing videos, no? Aren't you a bit intimidated?

Actually, I haven't seen the videos. And I don't know if they'd help anyway. I take more of a scientific approach to training.

So, how much are you making for this fight?