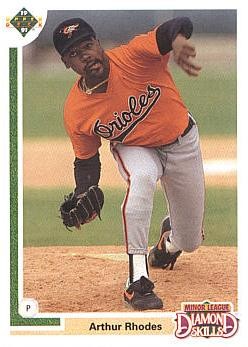 The Cardinals yesterday came to terms with the latest in a long, long line of reclamation projects, signing 41-year-old Arthur Rhodes to a contract which will make him the club's new LOOGY. (Left-handed One Out GuY.) The Cards have been dangerously undermanned in the lefty relief area, having just one sinister fellow in the 'pen.
The good news is that Tony La Russa will no longer have to struggle to tell the umpire which pitcher is coming in, as Rhodes is much easier to both spell and pronounce than Rzepczynski. The bad news is that the Cardinals just added a middle-aged reliever who may not have any arrows left in his quiver.
Come to think of it, I'm not sure this should really be called a reclamation project. It's really more like buying your cousin's 1987 Nissan Stanza with the wired-up muffler for five hundred bucks and hoping it will last you three more paychecks until you can save up enough for a down payment on a real car. I'm not sure what that's called, but I don't think reclamation is the correct word.
Rhodes was released recently by the Texas Rangers after posting a 4.81 ERA in 24.1 innings of relief work this season. His FIP was an even more horrifying 5.97. Now, I know those numbers don't exactly inspire confidence this will be the move to put the Redbirds over the top, but in fairness to Rhodes he was pitching in a brutal environment in Texas. Going from Arlington to Busch Stadium could very well give him a bit of a boost.
Looking through the rest of Rhodes's numbers, he was bitten ridiculously hard by the home run bug this season, allowing a full 14% of fly balls in play to leave the park. Surely that number has to come down some, either from a change in environs or simple regression to the mean. Then again, it seems to me I heard people saying those same sorts of things about Ryan Franklin's elevated homer numbers, and we see how that worked out. In fact, it seems as if a lot of pitchers suddenly see huge spikes in their home run totals toward the end of their careers. Call it bad luck if you like, but I think it probably has more to do with the high number of meatballs pitchers who have lost their stuff tend to throw up there.
In all honesty, there's just one number I really care about with Rhodes, and it's 5.55. That's his strikeout per nine innings number this year. Spoiler alert: 5.55 K/9 is not good. At all. Particularly when his K/9 numbers over the last three years have been 10.19, 8.10, and 8.18. When a 41 year old pitcher suddenly goes from striking out almost a batter per inning to a rate more commonly associated with pitchers from the Dead Ball era, I see that as a rather serious red flag.
Of course, the Cards don't see it as a red flag, due to their patented scouting method of asking patients waking up from five year comas to name the ten best baseball players they can think of. This is last year's Pedro Feliz pickup all dressed up in 2011 clothes and standing on the mound instead of next to third base.
In addition to all of that unpleasantness, Rhodes no longer even has the ability to neutralize left-handers. He's allowed lefties a .715 OPS this season, which isn't terrible, but isn't really great, either, and looks much, much worse when you put it into the context that Kyle McClellan, who has been serving as sort of the unofficial second lefty since Trever Miller and Brian Tallett left town, has held lefties to a .583 OPS this season.
So here we have a pitcher on the wrong side of 40, striking out barely two-thirds as many hitters as he has the past few years, giving up home runs in bunches, and doing a worse job of retiring left-handed hitters than the right-hander the Cards are currently deploying to combat them.
The good news is the Cards didn't give up any prospects for him, and he'll only cost the team a pro-rated portion of the league minimum. Hoo-ray.
Oh, well. At least Tony is happy now to have his ever-so-important second lefty back in the bullpen, and a washed-up veteran to boot. Maybe now we'll get a more entertaining excuse the next time he leaves Octavio Dotel in to face the opposition's most dangerous lefties.