Peter Kinder Responds to Allegations: "This Woman's Bizarre Story Is Not True" 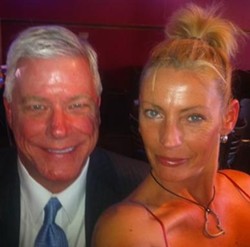 This morning we wrote how Peter Kinder has remained mum since Tuesday when Riverfront Times first revealed a former stripper's startling allegations against Missouri's lieutenant governor.

Tammy Chapman accuses Kinder of being one of her best customers when she worked as a dancer at Diamond Cabaret in Sauget in the mid-1990s. But once Kinder became rough with her during private dances, Chapman refused to perform for him.

This year Chapman again ran into Kinder when he visited Verlin's, a bar in the Grove Neighborhood where she and other waitresses sling drinks in their underwear. Chapman says Kinder asked her to move in with him.

Today Kinder issued a statement quickly denying Chapman's claims, and then suggested that Missouri Governor Jay Nixon is to blame for "false stories" about his past.


Like most people I am not proud of every place I have been but this woman's bizarre story is not true. The Democrats have tried to use these tactics against me in the past and they have failed. Jay Nixon may want to make up false stories about the past, but I, like most Missourians, remain focused on the issues that are important to Missourians like jobs and education. Under Jay Nixon's leadership, Missouri ranked third-worst in terms of jobs losses in 2010 and nearly 50,000 fewer Missourians are employed now than when Jay Nixon took office. Today, Missouri's unemployment is 8.8%, we are being out-performed by all but three of the states that border Missouri and more than 269,000 Missourians cannot find work. Our schools are failing, our families are hurting and I will remain focused on talking about the issues that will move Missouri forward.

But as RFT's Sarah Fenske, who broke the story, explained earlier today, Kinder is wrong to think this is some grand conspiracy.


[T]he whole sordid tale began unfolding last Thursday, when we jokingly published a photo of Kinder "pressing the flesh" at a St. Louis bar. We (honestly!) had no idea that the bar, Verlin's, was known for its "pantsless parties," in which bartenders sling drinks in their panties. Or that he was posing with a former "Penthouse pet of the month" -- or that the "pet," now a 39-year-old, openly gay bartender, would be interested in sharing her story when we tracked her down. We just thought the picture was moderately amusing," explains Fenske. "Really, the only reason any of this came to light is because RFT readers are such barflies, they almost immediately recognized the bar -- and the bartender. The GOP may want to claim this was an organized effort, but it looks a whole lot more like that new-fangled "crowd sourcing" thing to us.

In other news, Kinder's response finally opened the door for the Post-Dispatch to report on the story with a brief article this afternoon on stltoday.com. And shock of all shocks, the article even mentions how the Riverfront Times first broke the story. We can just imagine the Post-Dispatch editors holding their noses as they let the name of St. Louis' alternative weekly appear in their pristine pages.