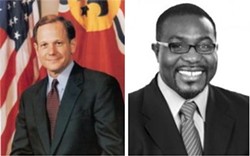 The next election for mayor of St. Louis is still some twenty months away, but already the campaigns are underway.

Incumbent mayor Francis Slay currently has over $611,000 of cash on hand for the 2013 election, according to the latest campaign finance reports filed last month. In the second quarter of this year, Slay raised $125,000 from dozens of contributors, many of whom doled out five- and six-figure checks to the campaign.

Some of the big names donating to Slay, and the gifts they gave in the second quarter, include:


Meanwhile, the man widely believed to be planning to challenge Slay for mayor -- Board of Aldermen President Lewis Reed -- currently has around $133,000 in his campaign coffers. Reed took in $95,000 in the second quarter of 2011, with most of his contributions coming in at less than $1,000. The major exception to that came on June 20 when Reed received a check made out for $30,001.

That gift came courtesy of who else? Financier Rex Sinquefield. So does this mean that Missouri's biggest political donor is now in Reed's corner?

We're putting in a call to find out. In the meantime, it's worth noting that Sinquefield throws a lot of money around, and he's already donated to Slay's 2013 re-election bid: He cut a check of $50,000 Slay's campaign committee way back in December 2009.