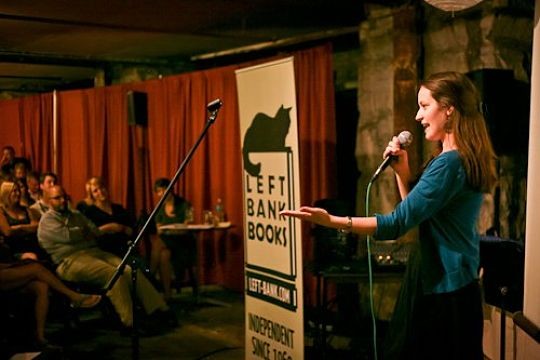 It took almost as much time to come up with a name for the city's now local-centric story slam as it did to change its focus to St. Louis. For an organization so obsessed with the power of words, decisions that combine them can be tough. In the end, the new group chose the simplest option, the St. Louis TEN: ten stories, at ten minutes each, ten times a year. The name fits, and so far, so does the new focus.

The group of local storytellers ended their most recent round of sharing last week in the basement of downtown's Bridge Tap House and Wine Bar, debuting the new name less than one month after their final meeting under the previous name. Originally known as MothUp St. Louis because of its affiliation with the popular New York-based storytelling group the Moth, the local group chose to end all ties after their June 30 meeting, believing that the Moth's reformed guidelines were too stringent.

The change was accompanied by an increased focus on the city that houses it, and it was important for founder Stacey Wehe and the group's other volunteers to choose a name and new set of principles that reflected that. The organizers wrote a Facebook post asking for help with the new name and chose the final option for its simplicity.

"We're trying to get everyone to transfer over without any confusion, and we thought that would help," Wehe says. "It's self-explanatory, and we liked the cleanliness and crispness."

The final break between the parent organization and its former child was a clean one, Wehe says, and the two sets of organizers continue to keep in touch -- though "we don't gab on the phone all the time or anything," she says. The internal transition was smoother than expected, completed with an ease Wehe and her partners hope to translate to the group's membership.

Organizers left all online ties to MothUp St. Louis intact for archival purposes while simultaneously encouraging those who supported the sites to convert to the new Facebook and YouTube accounts, where photos and videos of the refocused group will now be uploaded. "We're trying to keep everyone informed without changing it all overnight," Wehe says. "Our numbers are still a little low on Facebook, but we had more than 200 people at our first event, so I'd say we're doing OK."

Despite that significant increase in first-time attendees, few additional changes marked the lineup for the first St. Louis TEN. The atmosphere included the typical reflection on community, the rules were the same, and the venue was one used for previous MothUp St. Louis events. Storytellers have ten minutes to complete a tale of their choosing, while the audience in turn is expected to be responsive to the emotions that come with it.

"It was kind of a non-event, in a way," Wehe says. "There were a lot of newcomers, which is always great to see, but the same usual people made it out to support the new group."

The entire process has included a heavy amount of work behind the scenes, which means Wehe and the group's eight-months-pregnant emcee have elected August as one of its off months. In the meantime, organizers are working to establish the St. Louis TEN as a nonprofit entity through 501(c)(3) applications. After receiving approval at the state level, the group is looking for a volunteer lawyer to assist with the federal paperwork.

"Mostly we're just happy with the increased civic pride and the ability to make it all St. Louis," Wehe says. "We're no longer tied to New York."