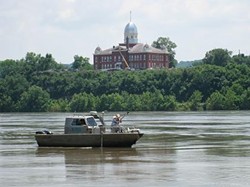 A new study out today indicates that the Mississippi River Basin (that includes the Missouri and Illinois Rivers) remains just as polluted from nitrates today as it was in the 1980s.

The news comes despite efforts over the past quarter century to reduce the flow of nitrates -- most commonly caused from fertilizer run-off -- into the river system. The study by the U.S. Geological Survey looked at nitrate levels between 1980 and 2008 and found the measurements to be roughly the same, if not higher, today.

The nitrates entering the Mississippi River Basin eventually spill out into the Gulf of Mexico and contribute to the oxygen-starved "Dead Zone" that was on track to reach a record size this year. The USGS study found that nitrates entering the gulf actually increased 10 percent between 1980 and 2008.

The town of Hermann, Missouri, also made news in the study as researchers found the level of nitrates at the Missouri River there increased 76 percent between 1980 and 2008.

Lori Sprague, USGS hydrologist and lead author on the report, tells Daily RFT this morning that the cause of the increased nitrates remain unknown.

"That's what we want to know next," she says. "The area inside the basin is so large that it's difficult to pinpoint. It could be a number of factors from fertilizer to increased crop acreage and livestock to the atmospheric inputs from industry and the release from waste water treatment facilities.