It looks a bit like NASA's Mission Control inside a new St. Louis police substation still under construction on Natural Bridge Road.

Sitting in front of three gigantic flat-screen monitors, St. Louis police officer Quiana Dickerson uses a mouse to switch back and forth between the video feeds coming from fourteen different cameras installed throughout the 21st Ward.

With a click of a button, Dickerson has one of the cameras zoom in to capture the license plate of a vehicle and close-up images of two people standing near the vehicle.

"This technology transforms officer Dickerson into 'super cop,'" says 21st Alderman Antonio French. "From in front of these monitors, one officer can patrol several neighborhoods at once." 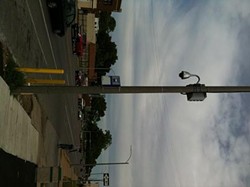 French first began pushing for surveillance cameras in the spring of 2010. Today his vision becomes reality, with the official ribbon-cutting on a program that -- if successful -- could find its way into nearby wards. "We're something of the guinea pig, but similar systems have proven to deter crime in other cities," says French. "We're optimistic the same will happen here."

The cameras run along Natural Bridge Avenue and other streets in the ward, including a stretch of Lee Avenue that experienced four homicides in 2010. French says that the cameras already seem to be working, even though they were just turned on in recent days.

"They began going up six weeks ago, and already we've seen a drop in crime in the ward -- especially in homicides," he says.

French spent about $400,000 in Capital Improvement Funds to pay for the installation and equipment costs of the cameras. Security firm ADT -- perhaps best known for its home burglary alarms -- won the contract to install the system.

This morning, French, St. Louis police chief Dan Isom and other dignitaries will officially unveil the system at a 10 a.m. news conference. And while some civil libertarians have reached out to French to voice their concerns about the cameras, he says he's had no similar feedback from his constituents.

"There have been no 'big brother' complaints from inside the 21st Ward," he says. "Those folks who don't like the cameras don't live in a place that had fourteen murders last year."