What Impact Will Jerome Murphy's Injury Have on Rams? 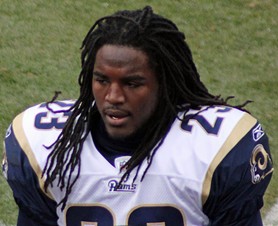 Jerome Murphy is number three on the Rams' depth chart at cornerback, right behind secondary mainstay Ron Bartell and the emerging Bradley Fletcher. The good news is that Murphy is pretty solid as far as nickel corners go, with the physical tools and toughness to make an impact in press coverage.
The bad news is that Murphy has a broken ankle, which will keep him off the field for quite a long time. Ergo, that physical tools and toughness thing I was just saying doesn't do the Rams a whole lot of good at the moment.
Of course, losing your backup corner isn't the worst thing that can befall a football team. Still, the news could certainly be better, and now the Rams will have to figure out how to fill Murphy's spot in the short term.
A timetable for the injury hasn't really been set as of yet, but this sort of injury is usually a 6-8 week recovery. Assuming eight weeks, Murphy would be eligible to return right around week five, which is when the Rams have their bye week. That's actually a bit lucky, but even so it's tough to really forecast Murphy coming back as soon as he's available. More likely he won't be back until something like week eight, and it might be even longer before he can get up to full speed. Make no mistake; this is a serious blow to the Rams' defensive depth. Still, it could be worse. Bones heal. If this were a ligament tear we might not see Jerome Murphy until 2012.
In the meantime, the Rams' addition of Al Harris this offseason has suddenly become a much bigger move. At the time, I didn't think Harris would really have any kind of impact on the team; I didn't even include him when looking at the Rams' key offseason pickups. Now, though, if Harris still has anything left in the tank, it could turn out to be one of the most important signings the Rams made this year. Or, if he doesn't, it could just be a disaster.
Luckily, this won't force Harris to play every down, which I don't think he could handle at this stage of his career. Working in nickel situations in passing downs, though, just might still be within Harris's grasp. We had all better hope so, anyway.
Looking for a silver lining? Well, there isn't much of one, but the old saying about god and doors and windows still applies, I suppose. At the very least, the Rams may just get a chance to take a longer look at some of the young defensive backs on their roster. Jonathan Nelson was a seventh-round pick for the Rams out of Oklahoma this year. He's listed at safety after playing primarily corner for the Sooners, mostly because there are concerns about his speed playing on the edge. I wouldn't be at all surprised to see him get some looks playing nickel. There are others as well, but I think Nelson might fit the bill pretty well.
Hopefully Murphy doesn't encounter any major setbacks as he tries to return to the field, and we'll see him back by midseason at the latest. If not, though, the Rams may very well find themselves in need of outside help to prevent the secondary from becoming a serious issue.