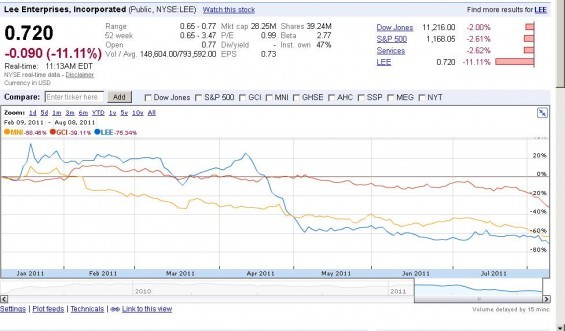 Another quarterly report, another piece of bad news.

That's the woefully predictable pattern coming out of Davenport, Iowa, the home of the St. Louis Post-Dispatch's parent company, Lee Enterprises. As we reported last month, the newspaper company's stock has fallen so precipitously that it's in danger of being delisted from the New York Stock Exchange. The NYSE typically doesn't list stocks that sell for less than $1 per share, as their low value makes them subject to wild swings in value; as of July 1, Lee was trading at 99 cents per share.

Since then, things have only gotten worse. As of today, the company's stock is trading at just 71 cents per share. That's attributable to the stock market's overall poor health (as you can see in the graph above, both Gannett and McClatchy have also dropped over the last six months), but Friday's latest earning report certainly didn't help.

As the third-quarter report makes clear, Lee is continuing to lose ad revenue for its print edition -- and digital ad sales are not rising quickly enough to begin to stanch the bleeding. Even though digital revenue is up 22 percent compared to this quarter in 2010, the company's overall ad revenue is still down 5.6 percent overall.

And, it's important to note, that's 5.6 percent lower than the third quarter in 2010, which was already a pretty shitty quarter. It's not like we're comparing the revenue to the heady days of the aughts.

The looming problem for Lee, however, isn't the day-to-day bleeding. It's the company's debt. Thanks in part to the Iowa company's purchase of St. Louis-based Pulitzer, it has $990 million in debt coming due next April. It had hoped to sell junk bonds to stave off its creditors (and bankruptcy), but it had to scrap the deal when it became clear there wouldn't be investors willing to make the purchase.

This post was edited at 4:30 to correct a wrongly reported number in the final paragraph.