Okay, so the following story fits the purposes of a blog for a couple of reasons.

1. It's not earth-shattering news, though I suspect it will fire up a few people who've been in similar situations.
2. I know the main person involved, Mark Madonna. He's a co-worker of mine at the RFT, so, yes, there's some admitted bias here on my take on his story. Still, I think it's interesting enough for a re-telling here.

On July 12, Madonna's house in the Holly Hills neighborhood of south St. Louis caught fire when a mysterious blaze engulfed the home immediately to south of his and spread to the homes of the adjoining neighbors. Madonna was just getting ready for bed when he heard the crackle of flames and then noticed an orange glow outside the window. He escaped with his dog, Bella. Madonna's cat, Mike, wasn't as lucky. It died from smoke inhalation.

Since that night, Madonna's insurance company has paid to put him up in a hotel and now an apartment as it processes his claim. Madonna's house has no electricity and reeks of smoke. It is -- for all intents and purposes -- uninhabitable, though not officially condemned. Once the insurance check clears, Madonna plans to rehab the house and has already talked to a general contractor about getting it done as quickly as possible.

Madonna was a bit surprised then when he received a letter this week from the city's Department of Public Safety citing him for broken windows, defective siding and damaged fascia resulting from the fire. 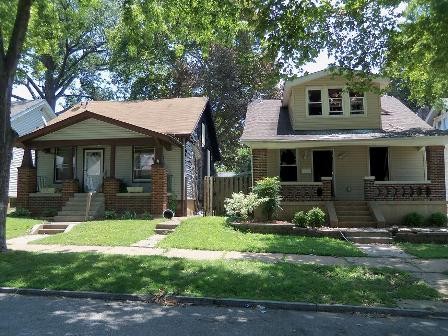 The letter encouraged Madonna to fix the citations within two months or be fined $25 per violation and possibly get referred to the court for prosecution. If he wanted to discuss the issue, he could call the building inspector or appeal the citations for a fee of $150.

The letter was also the first correspondence Madonna has had with City Hall since the fire, though he's been in frequent contact with the police department's bomb and arson squad. Its investigators believe someone -- not Madonna -- started the fire at the neighbor's home.

To Madonna, the letter from the building inspector was insensitive at best and insulting at worst. But that's not the way City Hall sees it. It says it's doing Madonna a favor.

"The city did the right thing with documenting the damage and sending a letter, and we hope that the homeowner will soon be able to repair his property," says Mayor Francis Slay's spokeswoman, Kara Bowlin, in an email to Daily RFT.

Bowlin adds that many insurance companies require such a letter before they're willing to dole out money to the homeowner. Moreover, the city routinely sends out such a letter to people like Madonna whose homes have been damaged through not fault of their own.

That's right. If an arsonist destroys your house or your home is torn asunder from tornado (or other natural disaster) expect a prompt letter from the city tsk-tsking you for the unsightly condition of your domicile.

But, says Bowlin, the city is willing work with victims like Madonna. That's why it gave him 60 days to make the repairs and is more than willing to give him an extension if need be.

Madonna says he plans to request such an extension, as the rebuilding of his home probably won't be finished until January. Still he wonders if the city couldn't have used a little more tact when issuing the letter warning him of the violations.

"It's not like the violations they cited were a result of poor maintenance," says Madonna. "The windows broke and the siding melted as a result of a fire that was beyond my control. Now this letter is just one more headache I have to deal with."

Keep up on all the latest St. Louis regional news and gossip by following @chadgarrison on Twitter and Daily RFT on Facebook.