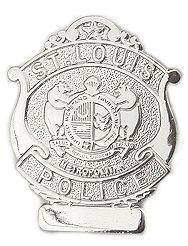 It must really suck to be Lt. Henrietta Arnold of the St. Louis Metropolitan Police. Either she got royally screwed by the department, or she's quite possibly the worst police officer ever.

Nobody disputes the following three points:

1) At midday on July 3, 2010, the lieutenant had officer Susie Lorthridge drive her home to Riverview while on duty. The house is technically in the county, just a stone's throw from the northern tip of the city.

2) When they arrived, Arnold -- who is black -- discovered her son in the company of his white girlfriend. (Arnold is now claiming in court records to have warned the girl that she wasn't welcome at the house.) Arnold and Lorthridge then arrested the girl for trespassing.

3) But the arrest was not for trespassing at Arnold's residence, mind you: That would've been outside the jurisdiction of the city police department. Rather, the officers wrote in their report that the young girl had been ambling around barefoot at the nearby intersection of Riverview and Spring Garden -- which is in the city of St. Louis -- looking "extremely unkempt."

Jeff Jensen is the attorney representing the girl. He filed a lawsuit against Arnold on her behalf in November. (The girl is identified in the suit only as "SL.")

In the complaint, he alleges that the police report is riddled with blatant lies. Among them:

But here's the biggest whopper of all: The report cites a witness, supposedly an employee of Riverway Development LLC, named Richard Delaney. But the real Richard Delaney wasn't even in town on that day. In fact, he was a resident of Shelbyville, Indiana, and was in an emergency room on the date in question.

So where did the cops get his name from?

Turns out, Delaney and his wife, Terrie, had gotten in a minor accident while passing through St. Louis in 2007, according to police records. Presumably, all Arnold or someone under her supervision would've had to do was pluck Delaney's name out of the system and plug it into the trespassing report.

"I don't know this Lieutenant's name," she says. "But she's really lucky I can't get my hands on her, because I'd like to slap her silly. Out of all the names in all of their police files, why did she have to pull this one out?"

Asked how he found all the errors in Arnold's report, Jensen said, "We have a team of former FBI agents and police officers that investigate all our cases." He added that the bogus trespassing charge against his client was never even submitted to the city counselor for prosecution.

But after Arnold and Lothridge arrested SL for trespassing last July, the plot thickened, quickened and sickened: Internal Affairs Division got wind of the matter. Arnold learned that she was being investigated.

That's when Arnold's son allegedly approached SL, begging her to change her story. When SL refused, he "brutally assaulted" her on September 7, according to the complaint,

"resulting in four days of hospitalization. The physical injuries to [SL] resulting from this beating included a punctured lung, air around the heart, and multiple bruises, including bruises around the neck due to choking."


Officer Lorthridge and Lt. Arnold were both placed on administrative duty (i.e., off the street, working at desks) pending the outcome of their cases.

Lorthridge resigned from the department in December.

That same month, Arnold was suspended. Internal Affairs sustained the charges against her and recommended her termination. She's decided to fight it, and her board trial is on Monday morning, according to a police spokesperson.

But she's fighting back in another way too: She's filed her own lawsuit in federal court against the Board of Police Commissioners and her superiors on the force, accusing them of employment discrimination and much more. Since January 2009, she writes

She singles out Cpts. Steven Mueller, Mary Warnecke, William Swiderski and Colonel Antoinette Filla, accusing them of various wrongs that, frankly, are not always easy to follow (she filed pro se, meaning without the aid of an attorney).

But the most titillating allegation by far involves Colonel Reggie Harris, who runs internal affairs -- the very entity that's recommended giving her the boot.

Col. Reggie Harris phoned my home and asked if he could stop by because he was in the area. At the time I considered him a mentor....With at my home he kissed me. I had a conversation with him concerning how uncomfortable his actions made me. He stated it wouldn't happen again. A couple of months later he instructed me to come to his office. As we left his office he kissed me again....Eventually I began to avoid his calls....I was subsequently offered jobs within his division. Even though things in my current assignment became unbearable I refused to have a physical relationship with him.

Arnold never directly says that this compromised IAD's investigation of her. But that's the implication. (Read her full complaint here).

Check back for updates after the hearing Monday.