Should the Rams Be In On Osi Umenyiora? 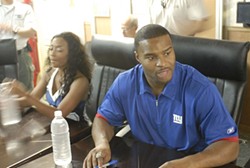 The annual drama that is the New York Giants/Osi Umenyiora contract dispute has recently signed on for what seems like a tenth consecutive season, with the Giants giving Umenyiora permission to seek a trade.
First off, it seems a little odd to give a player permission to seek a trade, doesn't it? I mean, isn't that the general manager's job? Or the manager's job, in the case of the St. Louis Cardinals?
Anyhow, the Giants initially demanded Osi find someone willing to exchange a first-round draft pick for his services, which is just absurd. NFL teams do not give away first round picks for 30-year-old players, no matter how good they might be at their respective jobs. Since then, the Giants' demands have reportedly come down into the more reasonable range of a second-round pick, and some are speculating they may end up moving Umenyiora for a third.
So with that in mind, would -- or should -- the Rams look into bringing in the defensive end for a reunion with his old defensive coach?

To put it bluntly, if the Rams could get Umenyiora for a second-round pick, they should do that deal right the eff now. Osi is an extraordinarily gifted pass-rusher, and would give the Rams one of the most feared groups of defensive linemen in all of football. Steve Spagnuolo won with four defensive ends rotating in with the Giants, and bringing in Osi would give him the same luxury here. At almost 30 years old, Umenyiora isn't a young player by any means, but he should still have plenty of tread on the tires, particularly if he would be used in a rotation. Umenyiora is a true impact defensive end, as well, with a total of 60 sacks in his seven-year career. So yes, he would definitely be worth a look.
The more pressing question for the Rams -- or any team looking at Umenyiora, really -- is the potential cap ramifications of acquiring him. As late in the free agent period as it is now, there are a large number of team simply out of money. Picking up Umenyiora would naturally require signing him to a new contract, and while he isn't going to get eight figures, it won't be a small little bit of pocket change, either.
What the Rams' cap situation is at the moment I'm honestly not sure. Conflicting reports on exactly how much money teams have to spend is all part of the process of figuring out life in this new NFL world, and it may be the Rams simply don't have the kind of cap space to add another sizable contract.
If they do, though, I would hope they would at least take a long, hard look at bringing in such a talented player, one who could immediately bump this pass rush into the stratosphere Spagnuolo's previous crew occupied.