Rams: Let's Hope the Season is as Good as Free Agency

Training camp for NFL franchises is well underway, and the most frantic part of free agency is now past. That's not to say there aren't still moves to be made and players to be signed, but the bulk of the important deals have already happened. We can look around and get at least a fair idea of what teams are going to look like when games start being played.
So with that in mind, now seems like a pretty good time to take a look at what the Rams accomplished in free agency, as well as what they didn't. They've done what looks to me to be some pretty solid work, but there were also a pair of players I wanted to see here in St. Louis, both of whom signed elsewhere, so it isn't all roses and sunshine.
We looked at the team's needs a little while back, now let's see how well they did addressing those needs.
What Was Added
Harvey Dahl, OG
Dahl may be the key pickup for the Rams this offseason. If so, you could certainly do a whole lot worse. As part of one of the best offensive lines in all of football over the last couple seasons (that of the Atlanta Falcons), Dahl has proved his worth as a dominant physical force on the interior. The Falcons were faced with three free agents on the O-line, two of whom were guards, and chose to retain Justin Blalock instead of Dahl. The Rams jumped and reaped the benefits. 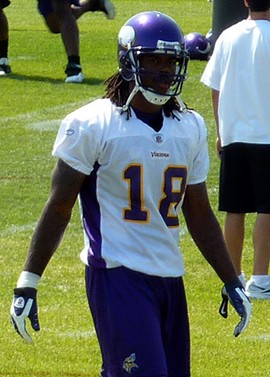 ​A Number One Receiver
There was really only one top-flight receiver on the market, and that was Sidney Rice. He would have instantly transformed the Rams' receiving corps. Instead, he went to Seattle, where we'll get to watch him try to haul in passes from some of the worst quarterbacks in the league, then take off once the Seahawks realise they need a guy who can actually make the throws.
The Rams didn't have the luxury of a huge bumper under the salary cap, so maybe Rice was unrealistic. There were plenty of other holes on the roster that needed to be filled. Still, when a receiver like Sidney Rice comes on the market unrestricted, if you can find a way to add him to your team I think you have to do it.
Backup Center
I was really, really hoping the Rams would take a look at Missouri's Tim Barnes as an undrafted free agent, but apparently they like having Hank Fraley take up a roster spot while accomplishing nothing week after week. The backup center position was a big part of the reason we saw so little Greco and so much Adam Goldberg last year, and that's just unacceptable to me.
Jason Brown has been a major disappointment since arriving in town, and the Rams have yet to make any kind of concerted effort to find his replacement. It may seem like a small thing, but it's still a move I think the front office could have easily made that they chose not to.
Backup Running Back
This, on the other hand, is kind of a big one. How many years in a row has it been now without a legitimate backup to Steven Jackson for the Rams now? I've honestly lost count.
There were plenty of running backs on the market this year, both of the power and finesse varieties, and the Rams have yet to bring in one of either type. Thankfully, there's still time for them to do so, and I have to believe they'll sign at least one, and possibly two, running backs to help carry the load. It's a buyer's market this year, so they will likely be able to afford a pair if they would like. Perhaps one full-fledged backup and one speedster. Regardless of how they go about it or what combination of players they ultimately settle on, upgrading the depth at running back is an absolute must for this team. They've come too far, and are too close to genuinely competing, to see it all derailed this season by a simple failure to adequately back up Steven Jackson in case something happens to keep him off the field.
Overall
Overall, I think the Rams have had a very productive free agency period this year. They didn't hit on either of the big defensive tackle targets, but then again they may not have really been in a position to do so considering how those situations developed. Failing to make a run at Sidney Rice bugs me a bit more, as he would have been an absolute game-changer as part of this team. As for the payroll hit Rice would have presented, well, just let Jacob Bell walk instead of renegotiating and you've got a nice chunk of change there to put toward Rice's salary.
Still, the club did upgrade three of their more pressing needs, adding depth a D-tackle, upgrading the interior offensive line, and adding a much-needed veteran presence at wide receiver, even if it wasn't the player most everyone was expecting. The Rams did as well for themselves as I think you could reasonably expect them to, and if there are areas I still think they could have done better, well, that's probably just the way it's always going to be. Building a team is much tougher than bitching about the team being built on a blog.
Now, though, the Rams absolutely have to come up with some sort of realistic Plan B behind SJ39. Jackson has enjoyed fairly good health the last few seasons, but the Rams have been playing without a safety net behind him for far too long. If Billy Devaney can come up with a dynamic, useful plan for backing up Jackson, I'll be fully willing to give the Rams a high grade and plenty of credit for their offseason work. If not, though, it'll just be one more year of doing good work in lots of areas, but ultimately failing to fill all the holes they need to fill.
Update: Since completing this column yesterday morning, the Rams agreed to terms with Jerious Norwood, a backup running back formerly of the Falcons. Norwood is a speedy, elusive playmaker in the Darren Sproles mold who should give the Rams a nice change of pace off the power running of Jackson. He's not really a proper backup running back though, as he's likely too small to handle even a partial load regularly, so the Rams will still probably need to bring in a back to take more regular carries. Cadillac Williams is still on the market, and would fit the bill nicely since Ronnie Brown went to join the rest of the NFL in Philadelphia.