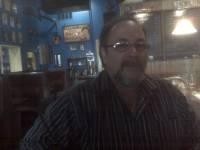 "An informed citizenry is the bulwark of a democracy" -- Thomas Jefferson

The power of The People rests upon our ability to hold elected officials accountable for their positions. This means wading through the spin and the baseless rhetoric to find fact. It's a constant and grueling challenge. Usually, the winners are the ones who most effectively communicate their message to The People -- regardless of whether it's a message of truth or a message of misinformation.

Today, Daily RFT introduces "Of the People," an analysis of the political narratives that dictate public consciousness. Each week we'll go to a bar (or other public space) and ask a citizen (or citizens) questions on a specific topic to see what messages are sticking. Because those who control the narrative, control America.

This week, the debt ceiling.

Less than an hour before the Senate passed the bill to raise the debt ceiling, Ron Vincent, a musician who plays the electric violin, sits at the bar at Blueberry Hill in the Delmar Loop, sipping a Maker's Mark and 7-Up.

"This should have been settled a long time ago," he says. "The Tea Party held Obama hostage."

He believes that the conservative wing of Congress was unreasonable in its negotiations with Democrats and the White House, especially in its refusal to raise taxes on the wealthy. President Obama, while perhaps conceding too much in the final agreement, "gave what he had to to get it done," he says.

This, of course, is exactly the narrative Democrats hope will emerge: That the Tea Party wing was willing to risk economic catastrophe in order to get spending cuts.The faction's stance in the debt ceiling debate produced the sharpest divide within the Republican party since the midterm elections, with the more conservative members arguing that the debt ceiling should not be raised unless a balanced budget amendment is passed.

Vincent thinks this ideological split in the GOP will eventually lead to the Tea Party's demise.

"I think they're gonna fade away," he says. "They're not ever going to be popular with the Republicans anymore. They only came in because the Republicans were bored and needed something to get attention."

The Republican divide, though, complicates the Democrats' message, which has so far focused on painting the entire Republican party as unreasonable and indifferent to the plight of the poor and the elderly. But, as Vincent's comments suggest, the Tea Party caucus may end up taking the brunt of the criticism, giving the more moderate Republicans the opportunity to present themselves as a logical middle ground between the "stubborn and extreme conservatism" on the right and the "big spending, debt building liberalism" on the left.

The viability of this strategy rests on whether Republicans believe the wave of Tea Party populism poses a legitimate threat to them in the primaries. Are they better off distancing themselves from the far-right? Or are they better off out-flanking potential conservative challengers? If the latter is true, then the Tea Party isn't likely to fade away. The Democrats may seek to blur the line of this ideological divide, hoping the extremist perception of the Tea Partiers rubs off on the old-guard Republicans, which could drive moderate voters away from the party.

Interestingly, while the Tea Party has taken its share of criticism from the left and center-right, it has loosened the stranglehold of the two-party system. As the debt ceiling debate illuminates, there now seems to be three collective minds in Congress. When the Tea Party takes a hard-line stance, House Republicans are forced to either give in to its demands (as they did for Boehner's debt ceiling bill) or win over Democrat votes.