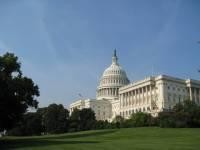 The narratives for one of the most high-profile senate races in America have begun to form. With the public's eyes on Capitol Hill for last couple of weeks, the major players -- Senator Claire McCaskill, Congressman Todd Akin, and former State Tresurer Sarah Steelman -- all angled themselves for their expected bare-knuckle brawl in 2012, laying the groundwork for campaign season.

There was McCaskill, making the media rounds, from Meet the Press to NPR to MSNBC. She called for tax raises on the wealthy to be included in any debt ceiling deal and called out Republicans for their "unwillingness... to compromise." By taking such a public stand, McCaskill has overtly established herself as a heavy-hitter in the Democratic party who is willing to bite back against Republicans. She's doubling down on her liberalism and her name recognition.

She knows how she will be attacked. Her opponents will call her "a big spending liberal who always defends President Obama, whose useless and expensive stimulus package kicked our struggling economy in the balls." Her media blitz seems to be a preemptive strike against that depiction, by framing the narrative within the tax reform/entitlement debate. "McCaskill supports eliminating tax cuts for the rich to protect the poor and elderly," the bumper stickers might say. Debt reduction plans will play a crucial role in the election, and McCaskill is positioning herself as the Defender of Medicare and Social Security.

The strategy complements the fact that both Republican candidates have stumbled out of the blocks, with Steelman struggling to raise money and Akin struggling to avoid regrettable quotes. Until Akin and Steelman get their campaigns rolling, at least, McCaskill comes off as a competent political juggernaut (though it's very possible McCaskill's private plane fiasco comes back to haunt her, especially if tax reform plays a big role in the narrative: "Claire McCaskill wants to raise taxes, yet she won't even pay them herself..." the deep-voiced narrator would say in the TV commercial).

The Republican primary battle, though, will be the real spectacle.

Since entering office in 2001, Akin has been one of the most conservative congressmen in the House of Representatives. When the Tea Party rolled into D.C., his conservatism found a home. The debt ceiling debate, though, was the first true measure of where Akin stands in the new political landscape. Would he side with most of the other veteran Republicans behind House Speaker John Boehner? Or would he side with the anti-establishment freshmen?

And Sarah Steelman has already made her move to expose Akin as an Establishment Politician. At the Smart Girl Summit over the weekend, The Beacon reported, she explained her weak fundraising by saying, "I'm not a Washington congressman like Todd Akin." Akin, of course, is the same guy who got caught using tax-payer money to fund a Tea Party rally in 2009. And while he did vote for Boehner's bill, he was one of the 66 Republicans to vote "no" on the final deal that passed the House yesterday and will likely pass the Senate later today. So it'll be tough to out-flank Akin on the right.

Still, Steelman is trying to swipe Akin's core constituency -- perhaps by highlighting his decade in office and painting him as a Tea Party fraud, who only rode the wave to protect his seat. Every (perceived) concession Akin makes will help Steelman frame him as a conservative sell-out.

Of course, Steelman has less than $200,000 in the war chest so far (compared to Akin's $1.18 million and McCaskill's $1.3 million). And though she's trying to spin this into the "establishment versus anti-establishment" narrative, her fundraising problems hint that Republican donors and voters might not consider her a viable candidate at this point. This leaves the door wide open for St. Louis businessman John Brunner, another "anti-establishment" candidate who is considering jumping into the race. After all, there is plenty of ideological space between Akin/Steelman and McCaskill.

Politico ranked this race as the fourth most competitive senate contest in 2012. The Post-Dispatch reported last week that Democrat and Republican groups have already spent a combined $700,000 in the advertising battle for the coveted Senate post.

It's gonna be a ferocious campaign season across America -- and Missouri voters have ringside seats.