Pick Up America: In St. Louis, Cleaning Up Your Mess 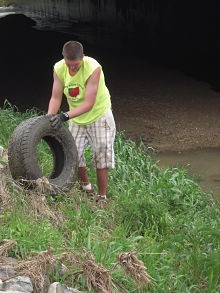 In the more than 200 days that the seven members of Pick Up America have spent traveling the country's highways and picking up its litter, they've also found a surprising thing to leave on the side of a road: family photos. At night, after days spent cleaning the highways and byways, the zero-waste promoters pin the found photos onto a board in their reappropriated school bus and make up stories that the people in them might have had. The same goes for love letters. "One was kind of sad, from this man to his ex-girlfriend about how he wanted her back," Katski says. "It was all crumpled up, like she had thrown it out the car window."

Evenings like that differ strikingly from the way the six men and sole woman on the bus spend their days. In the seventeen months since they began, they have picked up more than 118,000 pounds of litter across 1,100 miles of road. Earlier this month, they tackled the streets of St. Louis, though they are currently doing much of the same somewhere along I-94.

"The bus is pretty legit, but it has no AC, which sucks right about now," Katski says. Katski's tan skin is almost as dark as his brown acid wash shirt, and he's wearing sunglasses attached by a strap to his neck. The muscles on his right hand are pronounced due to their frequent contact with a trash-grabber. "It's really hot out there."

Pick Up America started as a way for one of its founders, Jeff Chen, to make a statement about transitioning to a zero-waste community. Chen, who like the rest of the group is in his twenties, was an intern at Yosemite National Park when he found the idea on the ground around him. Walking the park's Half Dome trail, he noticed it was littered with trash. He and a friend picked up every piece of it.

That was just the beginning. Aside from four months taken off from November to March of this year to avoid freezing, they have been picking up trash ever since. They started off the coast of Maryland at Assateague Island in March 2010 and made it all the way to Ripley, Ohio.

This year's work will end with the snow somewhere along the Kansas-Colorado border. "That we can do, maybe," Katski says. "Kansas is pretty big, and to literally walk across it, oh my god. At least it won't be summer."

Pick Up America is funded predominantly through private donations and corporate sponsors, though the nonprofit gets a surprising number of roadside donations during their daily pick-up. Although its goal is to walk the entirety of the collection route, the seven members occasionally take time off to work on community projects, like an Art For the Sky project they took on in Cincinnati. With the help of around 50 people, they formed a tree with an Earth inside of it out of human bodies, while someone in a helicopter photographed it from the sky.

Like most of the group's projects, the Earth tree was more symbolic than practical. Right now, that's still the point. "We don't expect people to just follow us across the country and change everything about their lives," Katski says. "That's not going to happen. What we do want is to show what's possible."

The volunteers of Pick Up America generally spend about seven to eight months with the group, during which time they travel in a 35-foot school bus reworked to include bunk beds and a fridge inside its blue and green exterior. The bus has no bathroom, so the volunteers rely on strangers. (For their three weeks in St. Louis, the volunteers have bunked with a Soulard couple.)

On a scale of one to ten, with one being pristine and ten being the filthy landscape that is southern Ohio, Gatski rates St. Louis a four. In the past month, the group has traveled through the suburbs ("ridiculously clean") the Loop ("The other side of Delmar was gross") and East St. Louis, where they staged community clean-up events across two weekends.

"St. Louis is way cleaner than average," Katski says. "In southern Ohio, we picked up a metric ton of trash in less than eight hours. It's just a filthy place, and it's been a lot better since we got out of there."

This week, however, the volunteers have spent the majority of their time off the road on their latest community project, one as symbolic as the others: a peace drum. Since the group's return from Bonnaroo, the members of Pick Up America have spent the past month and a half separating and saving the aluminum and scrap metal they find on the road. (Normally they sell it for beer and gas money.)

Along with materials donated by Living Lands and Waters, those materials will form the basis for a ten-person recycled peace drum they will debut this Saturday at Kiener Plaza. Once the drum makes its statement, it will go on display at the City Museum, where the volunteers are currently assembling it. "With its buckets and rain barrels and cowbells, it looks ridiculous," Katski says. "It looks like something straight out of Dr. Seuss, so it will fit right in at the City Museum."

As the group continues to approach Kansas and brainstorm more projects for the Midwest, it will gain a new volunteer and a few "trashterns" in the next few months. The goal is to end in San Francisco by December 2012, and their plans are pretty short-term from there. "When we get there, who knows?" Katski says.

Editor's note: This post was updated at 12:46 p.m. Tuesday to reflect corrected numbers.