Don't Worry Folks, Your Truck Nutz Are Safe in Missouri 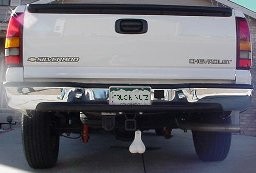 If you haven't heard (and how could you not, given the gravitas of the issue!?), a 65-year-old woman in South Carolina is scheduled for trial this month for having the, ahem, balls to flout the state's obscenity laws.

Last month, Virginia Tice was driving her pickup truck ornamented with replica bull testicles in the small town of Bonneau, when police chief Franco Fuda pulled her over and ticketed her for indecency. Specifically, Tuda believes Tice is in violation of the state's obscenity laws, which prohibit the public display of bumper stickers, decals or other devices that describe or portray indecent "sexual acts, excretory functions, or parts of the human body."

Fuda tells Reuters that if the fake testicles were a free speech issue, "I don't know what they would be trying to express." Meanwhile, Tice's attorneys say that their client's faux bull testicles are protected under the First Amendment.

Some states, including Maryland and Virginia, have attempted to ban the accessories sold under names like Truck Nutz and Bulls Balls. Here in Missouri, however, the fake testicles remain unchallenged.

"There is no statute in Missouri that covers them," Lt. John Hotz of the Missouri Highway Patrol tells Daily RFT. "There may be local laws against them, but nothing statewide."

That said, do you think bull balls are obscene? Cast your vote below.