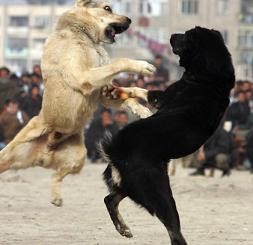 A dogfight has broken out in city hall, and it could last another 21 months.

The e-mail, from a member of Slay's staff to two Reed staffers, was allegedly sent July 5 and suggested that Reed attend a July 7 committee meeting where aldermen would discuss giving $250,000 in donations to Stray Rescue.

In the e-mail, Slay's office worried that the eight-person committee would reach a four-to-four deadlock on the issue and urged Reed to cast a decisive ninth vote as is his right as board president.

Reed didn't attend, and the vote did result in a tie. As a result this week Stray Rescue's founder and president Randy Grim blasted the board of aldermen and said his agency will no longer cooperate fully in assisting the city to manage stray animals.

The $250,000 Grim sought came from donations made through utility bills and was intended to build a new city shelter called Animal House that was to replace the city's old animal shelter on Gasconade. But Animal House never materialized and Slay last summer abruptly closed the Gasconade shelter following a news report condemning conditions at the facility. The mayor's office then forged an agreement to have Stray Rescue serve as the city's de facto animal shelter. As a consequence, many believed that Stray Rescue was entitled to the $250,000.

Reed's staff contends that their boss never saw the e-mail regarding the July 7 committee meeting from Slay's office and wonders why the mayor didn't simply call the board president as he has done when wanting Reed's help passing other legislation. (In a message on his blog this week, Reed says he fully supports giving the money to Stray Rescue.) Reed also says he was attending another meeting when aldermen voted on whether to give the donations to Stray Rescue.

This afternoon Reed, who's expected to challenge Slay for mayor in April 2013, fired back at the incumbent. In a letter (viewable here) he asks Slay to tell him how the Gasconade shelter became so deplorable under his watch.

So, what's the short end of this political pissing match? Slay has egg on his face for closing down Gasconade with little forethought and entering an agreement with Stray Rescue without any clear understanding of how the nonprofit agency could financially manage the task. Now the mayor's office is trying to wag the dog, so to speak, and blame the mess on the man it sees as its biggest threat: Lewis Reed.

And Reed? Well, he's not going to lie down and take it. Throw him a bone for that.