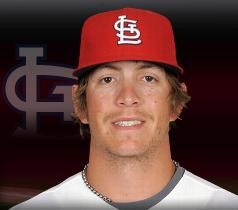 Tony Rasmus, the outspoken father of Colby Rasmus, has weighed in on his son's trade yesterday from the Cardinals to the Toronto Blue Jays. (A trade, btw, that RFT's baseball columnist, Aaron Schafer, calls one of the "stupidest, most asinine moves" he's ever seen.)

In an interview yesterday, the elder Rasmus blames Cardinals' manager Tony La Russ for his son's fall from grace in St. Louis.

"Tony needed pitching and wanted to force the GM into making a trade, so he belittled Colby to the fans," Tony Rasmus told the Toronto Sun. "Tony would like to have 25 pitchers ... like he thinks he has to put his stamp on every ball game."