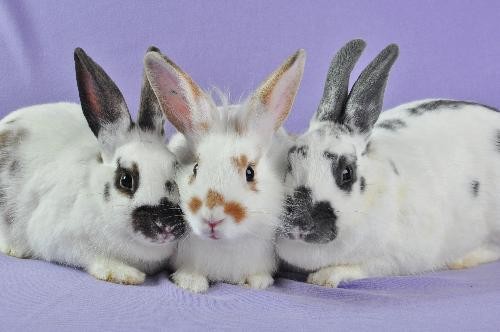 Animal welfare workers frequently deal with dogs, and cats, and (yes) rabbits. The long-eared furballs are actually the third most commonly abandoned pet, says Joy Gioia, chapter manager of the House Rabbit Society of Missouri -- so a call to assist with a domesticated bunny found on the streets or in the woods is hardly an unusual event.

But the call that came in that day in May wasn't just unusual...it was highly unusual.

For one thing: There were 26 rabbits that needed rescue.

For another: They were all piled into a single mesh container.

Oh, and then there's this: That container was sitting on top of a levee along the swollen banks of the Mississippi -- right as it was about to break. This wasn't just a rescue -- this was a scene from an action movie.

Indeed, when flooding devastated acres of farmland in southeastern Missouri in May, those 26 rabbits were very nearly victims. "They'd obviously been in the flood waters," Gioia recalls. "They were pretty filthy at the time they came to us." And, in true rabbit cliche, they were about to multiply: A few weeks after their rescue, one female gave birth to seven more bunnies. Even with two rabbits dying, that still left 31 in need of homes.

But there's a happy ending to this tale -- or at least, volunteers like Gioia are working on making one happen. After a few months in foster homes, the rabbits are now healthy, happy, spayed or neutered, and ready for adoption. They'll be at the Humane Society of Missouri, 1201 E. Macklind, from noon to 4 p.m. this Sunday, and one can be yours for just $39.95. (There are additional bunnies for adoption during the same hours at Westport Area Center, 2400 Drilling Service Drive, but since these lack a backstory involving rising floodwaters, we'll spare you the details. Suffice it to say they're super cute, too.)

Gioia warns would-be adopters that they won't be able to take the rabbits home on the very day of the event; her group wants to make sure that new owners both take a one-hour orientation class and have their home rabbit-ready before taking their pet home.

There's a reason, after all, that so many rabbits get abandoned: There's a lot of misinformation out there. "I find that rabbits are the most opinionated animal I've ever worked with," she says. "People don't expect them to be what they are. There are big misconceptions about rabbits -- they can be quite feisty!"

Which isn't a bad thing; Gioia only cautions that prospective owners do their homework and know what they're getting into. "We just want the families to be happy and the bunnies to be happy. We want a win/win situation for the families and for the animals." After all, these rabbits -- flood survivors that they are -- have been through enough already.

Below, some adorable footage of the flood babies at play.