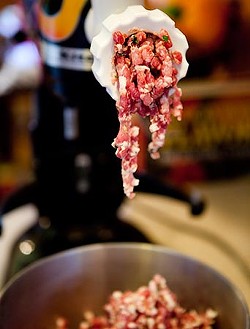 Missouri legislators have recently passed or attempted to pass at least a half-dozen state laws or resolutions written nearly word-for-word by a conservative corporate interest, according to an investigation by Progress Missouri.

The American Legislative Exchange Council (ALEC) is a nearly 40-year-old agency that bills itself as a 501(c)(3) but acts somewhat like a corporate lobbying agency, recruiting state legislators in Missouri and all 50 states to conferences in resort cities where they're introduced to legislation that favors the organization's corporate members. Legislators join ALEC for $100. Corporate members, meanwhile, pay upwards of $25,000 to join ALEC and, in so doing, get veto power over language in the bills.

Recently, The Nation obtained hundred of documents detailing ALEC's model legislation and disseminated the material on the site alecexposed.com. As Progress Missouri reveals, it seems some of that legislation has made its way to Jefferson City.

Today Daily RFT caught up with Progress Missouri's Sean Soendker Nicholson, who tells us that he believe he's just scratched the surface in finding seven pieces of legislation in Jefferson City that appear to have come directly from ALEC.

Daily RFT: Tell us how you came up with the seven examples you made public today?

Nicholson: We've been working on this since just this weekend. But already we've found quite a bit. Basically we're going through financial disclosures to see who is a member of ALEC and then looking at bills they've introduced to see if anything matches up with the ALEC legislation.

ALEC bills itself as non-partisan. Is that what you've found?

It's true that they do have some Democratic members, but as far as money they give back, almost all of their funds go to Republicans by a margin of about 95 to 5.

What Missouri bills seem to be the most egregious, in terms of mirroring ALEC legislation?

What other Missouri politicians have you found to be part of ALEC?

Lt. Governor Peter Kinder spoke at ALEC's 2010 conference and has attended many others. Cunningham was a national board member from 2005 to 2010. In the St. Louis region, other legislators who are members include Walt Bivins (R - South County), Sue Allen (R - Town & Country) among others. We're still compiling the list.

Some might argue that ALEC's involvement helps legislators. What's your opinion?

Call me crazy, but it doesn't seem that radical of a notion to believe that Missouri laws should be written by Missourians and not by corporate interests a thousand miles away. And what's really disturbing is that it's unknown -- for now -- how often this has happened. We've been working on it just a few days and already found all these examples. How many more are out there?