A Remarkably Good Day for the Rams 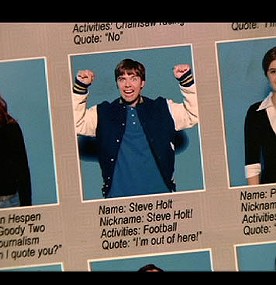 The Rams may have just had one of the best days in their long history as a franchise yesterday. In fact, I would go so far as to say it was a day any fan of the Rams should remember as a day for celebration from now until the end of time.
See, yesterday was the first day NFL teams could begin negotiating with free agents, and a couple things happened that just may have ensured the Rams a spot at the top of the division. I know, I know, you're thinking there's no way anything so world-altering could have happened in just one day -- especially a day when official deals weren't even being signed, just "agreed to" -- that would make such a huge difference in this franchise's fortunes.
Well, just wait for a moment and I'll tell you why you're wrong.
​The Rams did reportedly agree to a deal with their first free agent of the year, coming to terms with Quintin Mikell, the free agent safety recently of the Philadelphia Eagles. I covered Mikell just last week, when looking at some positions the Rams might be looking to upgrade, and while I liked Eric Weddles of San Diego ever-so-slightly better, Mikell is absolutely an elite player, and an outstanding fit for the Steve Spagnuolo defense. Fantastic move by the front office.
Also very nice was the news the Rams have arranged a meeting here in St. Louis with free agent linebacker Scott Shanle, late of the New Orleans Saints. I have to say, Shanle would represent a sizable upgrade himself, and is frankly a better player at linebacker than I expected the Rams to pursue. It's not a done deal, of course, by any means, but just the fact he's coming into town should tell you the Rams are serious about their pursuit. So more good news.
On the other hand, the guy I thought would be the best fit for the Rams' defensive tackle need, Barry Cofield, went and signed a big-ass contract with the Washington Redskins. Six years and roughly a gajillion dollars is what's being reported. (While I'm on the topic, I have to say I just don't understand how the Redskins manage to spend so much frigging money. There's a salary cap, right? So how is it they seem to give out one of the biggest contracts in league history pretty much once a year? It just doesn't make sense.) That's a big bit of bad news, bringing down the overall level of awesomeness for our hometown team.
So that's one great signing, an intriguing bit of news on what could be another really nice addition, and one free agent who would have been a great get for the Rams going elsewhere. Not exactly history making stuff, right?
Well, that one good signing for the Rams also happened to come on a day when last year's division champ, the Seattle Seahawks, took every possible step they could think of to avoid repeating. See, the Seahawks yesterday agreed to terms with not just one, but two quarterbacks. Proactive, for sure.

Their names? Tarvaris Jackson and Matt Leinart.
Oh. So, yeah. Proactive. That's right, sports fans, the Seattle Seahawks went out yesterday and voluntarily added two of the biggest quarterback busts in recent history to their roster, thus ensuring prosperity throughout the NFC West, with the notable exception of in Seattle.
So while it may seem like the Rams really only got a little better yesterday, just remember that while we'll be watching Sam Bradford under center for the 2011 season, the Seahawks will be choosing between Charlie Whitehurst, Tarvaris Jackson, and Matt Leinart to call their signals.
Makes just signing a safety look pretty damned good, doesn't it?