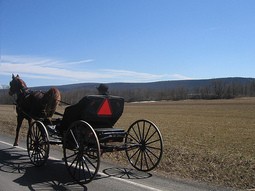 Missouri's general population may not be growing as fast as other states, but one small segment of the Show-Me State is bucking the trend.

Missouri's Amish community currently has the fourth-highest growth rate in the nation, according to St. Louis Public Radio. The station reports that in just two years -- 2009 to 2011 -- the Amish population grew in Missouri by fifteen percent due to the relatively large family size of its members and cheap farm land that has attracted Amish from other states. Some 10,000 Amish spread across 41 communities now call Missouri home.

So what's this mean for you "English" men and women (a.k.a. non-Amish)?

It means you need to put down the cell phone before you rear-end a buggy. Also steer clear of any Amish guy named Chester. He may just be a you-know-what.

Oh, and if you're a mountain lion in Missouri, avoid Amish country when they're conducting one of their predator hunts. No one, not even the Missouri Department of Conservation, can save you from that.