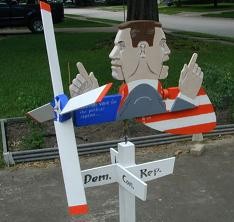 St. Louis Tea Party co-founder and political pundit Dana Loesch thinks hard-line conservatives such as herself are being smeared by media accounts referring to Norway's Anders Behring Breivik as a "right-wing extremist."

As you surely know, Breivik is currently in police custody after killing 76 people this weekend in coordinated bomb and gun attacks. The suspect was allegedly targeting Norway's Labor Party, which he considered to be too tolerant of Muslim immigrants.

But as Loesch argues in a piece in Big Journalism, the media has it wrong. Breivik is not a right-wing extremist. He's a left-winger, at least, according to a classic definition of the term she found on (where else?) Wikipedia.

No where in political history is "right wing" used to describe the ideology of limited government except during recent times by the left to discredit American conservatism -- and many American conservatives allow such an uneducated misuse...The media, in misusing "right wing" to immediately politicize the Oslo tragedy, indicted themselves on both ignorance and callousness.

As you might suspect, many folks have since questioned Loesch's argument. Adam Shriver at St. Louis Activist Hub does a good job debunking her interpretation of the term and notes that Loesch's online bio refers to her as a member of the "vast right-wing conspiracy." (Loesch argues on Twitter that the marketing department at 97.1 FM Talk wrote that copy.)

But one need not look any further than Loesch's own handiwork to see that she, too, has often confused what she calls the original meanings of left- and right-wing politics. In her writings on Big Journalism, Loesch is consistently attacking what she refers to as the "left" or "far-left." Most all of the time, the people and institutions she's referring to are politically liberal, which -- technically -- would make them "right" and Loesch wrong, right?

"I realize that the left is very excited about their new effort, but the logic fueling the creation of their new propaganda center seems overblown. Here's the thing: when it's a competition, biased media loses every time. Look at the dwindling circulations of the most infamous left-leaning publications."

"Excuse me if I disregard the left's outrage, the same side that screamed obscenities at a 14-year-old as she spoke during a pro-Walker Wisconsin rally; the same side who blamed the Tucson massacre on conservatives before the networks could accurately report whether or not Gabrielle Giffords' was still alive (an action which caused Arizona tea partiers and Sarah Palin to get a wave of death threats). You all on the left act surprised at how much your #newtone has grown!"

"The left will defend by saying Olberman only implied that she was a pig since he spoke of burning ham."

"Local media had to dig deep to find "religious leaders" to condemn Akin's remark and apparently only spoke to far-left, social justice churches, one of which somehow managed to con its congregation into a modified religious faith that supports the dichotomy of infant genocide and Christ."