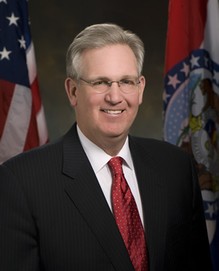 On Wednesday, Mayor Francis Slay wrote on his blog and the Post-Dispatch reported that a bill to bring local control to the St. Louis Metropolitan Police Department would be included in the special session now being planned for September.

At a speech at the Danforth Plant Science Center, the governor said that local control would be heard only if there was a "crisp-consensus" among legislators.

The Governor has stated that the special session should be reserved for urgent issues related to jobs.

State Senator Maria Chappelle-Nadal, who has been the most vocal critic of local control, echoed Nixon's sentiments on St. Louis Public Radio yesterday, saying that special sessions are usually only for for "economic reasons or an emergency."

But local control supporters argue that the bill died in May because it was held hostage by a group of senators seeking tax credit reform. So the two issues are consequently connected. Now the tax credit reform issue is resolved: Tens of millions will be cut from historic and low income housing tax credits in return for $360 million to be set aside for the China Hub project. That bill will definitely be included in the special session -- clearing the way for local control.

If it can get included in the special session, the local control bill is almost certain to pass. With the Police Officers Association now in support of it -- after getting their collective bargaining agreement and agreeing to the language of the bill -- the only real opposition to the bill has vanished.

The special session will most likely be held sometime before the annual veto session on September 14. So Mayor Slay and Co. have a few weeks to persuade the Governor. Maybe a box of chocolates. Or maybe a horse's head...