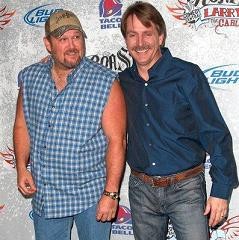 So, this morning Governor Jay Nixon threw his weight behind the St. Louis China Hub, telling an audience in St. Louis that he'll call legislators to a special "Getting it Done" session this fall to pass legislation approving $360 million in tax credits for the project.

On his blog this afternoon, St. Louis Mayor Francis Slay showered praise on Nixon and the hub to be called, St. Louis Aerotropolis. Slay concluded his musings by throwing out his own "let's get it done" shout out.

To which one could ask, do we really want our politicians quoting Larry the Cable Guy? And don't they realize that the comedian's "Git-R-Done" tagline is a joke about doing a half-ass job as quickly and as thoughtlessly as possible?

That's worth pondering given recent concerns that the aerotropolis project is incredibly naive and/or infeasible.