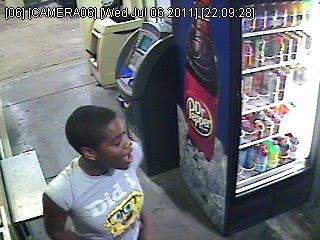 Have you seen this woman?

St. Louis police are wanting to question her regarding a robbery July 6 in downtown St. Louis. According to the cops, two men armed with a gun robbed a 38-year-old man around 10 p.m. that night in the 1100 block of Lucas.

The suspects were later caught on video surveillance (below) attempting to use the victim's credit card at the Gas Mart on south Broadway. With them at the time was the woman in the SpongeBob SquarePants T-shirt. All three later drove off in an  early 1990s maroon Buick or Oldsmobile with a large dent in the rear passenger door.

Anyone with information is urged to contact CrimeStoppers at 1-866-371-TIPS. Callers can remain anonymous. Callers who provide information that leads to an arrest may be eligible for a cash reward of up to $1,000.