On July 7, 2011, when rain halted the Cardinals' assault on the Diamondbacks in the sixth inning, local sportscasters found themselves with an hour to kill.

Kevin Wheeler, host of Sports Open Line at KMOX (1120 AM), decided to do something that hadn't been done in half a century: Air a 1960 interview that a young Jack Buck conducted with a retired Jackie Robinson, the first black player in the major leagues.

The topic of conversation: "the Negro" in America.

According to Wheeler, the replay drew emotional calls and e-mails to KMOX almost immediately.

"People were blown away," says Wheeler. "There were some people calling up in tears -- they'd had a positive reaction to hearing Jack's voice, or listening to the subject matter, reliving old memories. There were actually some people that were angry we were running that stuff. It was amazing to hear that. Usually you expect to be bored during a rain delay."

KMOX is currently in the process of digitizing its vast archives of reel-to-reel tape. So far, they've unearthed historic broadcasts, such as audio of the ceremonies at Stan Musial's final game in 1963 and the last game at Sportsman's Park in 1966.

The Buck-Robinson tape was found by an intern, according to KMOX executive producer Ben Boyd.

Early in the half-hour interview (not yet available in its entirety online), Buck opened the phone lines and told listeners, "Rather than remaining in a sports vein, we'd like to deal with race relations." 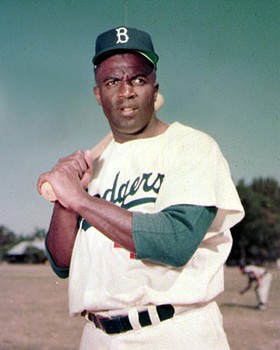 Which made sense, for, at the time, Robinson was an executive at Chock Full o'Nuts and actively engaged in the civil rights movement as well.

The first caller made a baseball inquiry, but Buck swiftly brought the discussion back around, asking Robinson if he thought black players were helping blacks and whites to get along better.

"I think the credit ought to go to people in the stands," Robinson responded graciously, "because the only thing they want is for their ballplayers to go out and win for their particular city....They have really accepted this particular thing."

Then, one by one, St. Louisans called in with their own race-related questions: What did Robinson think about the youngsters protesting with sit-ins? (He thought the world of them.) What did he think about presidential candidate John F. Kennedy? (Not much, it turned out.)

Certain questions asked would be unthinkable today on a major radio station. Check out this one concerning interracial marriage:


Or this gentleman's question about lack of trust between blacks and whites:

He and his crew plan to run other old broadcasts when games get paused due to weather.

"One guy [in an email] said specifically it was the longest he'd ever listened straight-through on a rain delay," Wheeler recalls. "Even I had fun, and I never have fun during rain delays. I sat there and listened to the whole thing as we were playing it."