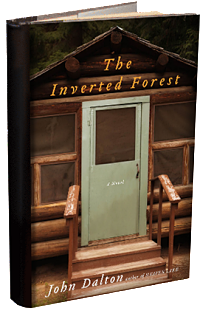 Somewhere in the next room, John Dalton's two daughters are watching Curious George cartoons as he explains his next project, a book that he frequently refers to as "strange and dark." It took the St. Louis author and University of Missouri-St. Louis English professor roughly four and a half years to complete The Inverted Forest, released today through Scribner, in large part because of the combination of professional obligations and those involving his daughters. The follow-up to his first novel, 2004's Heaven Lake, has already received considerable attention from outlets such as the Wall Street Journal, which called his style "polished and crisp."

The Inverted Forest made it onto the Beach Read list of New York Magazine's summer guide, even though its plot summary is as ominous as a summer ocean scene is blissful. The setting is 1996 in a storyline based in part on Dalton's own experience as a counselor at Camp Don Bosco in Hillboro, Missouri, in the 1980s. During his time there, the camp was frequented by disabled adult campers, who comprise the fodder for his knowledgeable redux of a similar scene.

Although Dalton is reticent to share too many spoilers -- you should really just read it -- he does promise a tragic and, yes, "strange and dark" event somewhere near the two-thirds mark.

Daily RFT: How did the idea for the new book come to you?

John Dalton: After Heaven Lake, I started on another book about the discontent of suburbia, but it didn't last very long. I started thinking about summer camp. I don't know why. I went to Camp Don Bosco as a counselor when I was 19, and it was one of those summers that plays a key part in your later life. And there has been a lot written about summer camps. The nostalgia doesn't interest me, but I remembered two specific weeks about summer camp during which mentally and physically handicapped adults came to visit, called then "state week" and "special week." My sister warned me, but I still wasn't prepared to take care of six adult disabled men and help them wash and eat and get to sleep and things like that. That idea I knew would be sort of dark and strange, but I knew it was much more original and got me excited as a writer.

Two-thirds of the way through the novel, something very tragic and dire happens, and instead of staying at summer camp, the novel jumps forward to present time in 2011 instead of 1996. And when it does, it jumps to minor characters, and I was impressed by how some of their lives expanded and came into focus once I gave them the time I needed to. When did your work on the new novel begin?

It was even a little bit before Heaven Lake come out. That's when I knew I was onto something that was good to me as a writer. It probably took four and a half years, and I wasn't able to work on it continuously. I was teaching in North Carolina, and we had two kids. When you add up the time I was working on it solidly, it comes out to about four and a half years, but my life was changing a lot during that time.

Your summer camp experience sounds like a more unusual one than most. What about the idea attracted you to this plotline?

I worked at camp in 1984, '85, '86, around there. I started talking to a friend of mine about camp, and she had the same feelings that I did that a lot of these state mentally handicapped campers were dangerous on a couple levels, as much as they were nice. They were very physically strong, and at age nineteen or so, we slept in these barracks that had maybe 40 or 50 campers outside. A lot of the campers would meet around the back and have sex. For me, being nineteen, that was astounding to me, but of course it's not astounding to me at all now. One of the reasons I realize now why we went to camp in the first place was that we came to hang out and meet girls and hook up in the woods. We certainly didn't do it for the money. We didn't see the irony at the time that the adult disabled campers were coming for the same reasons, but we thought that what we were doing was beautiful and free and what they were doing was bizarre and grotesque. You have to write a novel that has some sort of menace and forward plot, but that being said, it was a nice thing for them to escape a facility for a week and take part of something else.

What percent of the novel is based on your real-life experience?

For me as a writer, and this is true of both of my books, I have to know the culture firsthand. I had to travel to Taiwan previously. I had to live and work in a summer camp. On the other hand, I've always just known to make the rest up. You can't find anyone resembling me at all in The Inverted Forest, or anyone I worked with. I made that part up entirely, but it's strongly informed by my experiences.

What problems were you confronted with during the writing process?

It was challenging in two specific ways. First of all, I hope the novel isn't grim or bleak or dark over all, but there are a few dark sections where I write things that are traffic. There's an assault and a violent death in the novel. That's hard to do, to sit in a room and imagine very dark things and hope you get things perfectly right. That's a bracing experience.

The second thing is that I was fortunate to have sold the novel at 100 pages, but the downside is that you then have a deadline. The first time I didn't have a deadline, and I took eight or nine years to finish it and polish it. This time, I was a professor and was going up for tenure. I was a family man writing Inverted Forest, and I didn't have children previously. When I sat down this time, there was much more pressure. There was no absolutely screwing around. As soon as I sat down, I would know immediately that I had two hours and had to create at least 500 good words or I was going to have real trouble. What is your writing process like?

I start at the beginning of the novel, and I spend a long long time writing the first 60 to 80 pages. I'm figuring out where I'm going and what the characters are like, and I write and rewrite those chapters obsessively. Then, when they feel like they have said what I wanted to say and they're going somewhere clearly. I'm just a clear, meticulous writer. In some ways good and not so good.

With this second book, it was largely the deadline, but I knew that in terms of structure and story, I had gotten that right. With the first book, I would print out all the pages and put them, on my desk, and then I'd flip through it and open it to any random section to start reading. If the thing I turned to was interesting and elegantly written and made me want to continue, I'd flip through again. If it kept turning out that way, I'd feel happy. What carried over was the ability to write full sentences. That goes a long way when it comes to putting words together, so there were not quite as many drafts this time altogether. How have you changed as a writer between the two books?

I think my prose is tighter and more focused, and the same is true of my storytelling. When you're a first-time writer, you tend to tell all kind of scenes in order to tell a story, and as you get better, you get more efficient. You say to yourself, "I don't need to write that scene. I need to move on to the next scene and really perfect that." The sentences get muscular and more focused.

Is it important to you to relate to your characters?

I do, absolutely. There's nothing of me in the book, but there's me in the characters. I absolutely relate to all of them. You want to relate in all of the interesting, insightful ways, but you don't want to get too close to your characters or relate to them too much. It's hard for me. I don't want the novel to turn simple or sentimental or too affectionate. The first-person character is this old man, Schuller Kindermann: He's fussy and he's judgmental and lots of things I'm really not. But he really wants the world to be sort of simple and pure, and one of the things the novel is about is Schuller being aggravated that there are all of these sexual motives going on at camp. I think that's something a lot of us can relate to. How do your fellow counselors feel about the direction your book has taken?

Last year, there was a reunion for people who worked at Camp Don Bosco, and it was really nice. But of course what people want to do is get together and talk about everyone and how great it was and how many fun things happened, and that's great, but it doesn't make for a novel. With the people I was close to, I told them I was writing a book about State Week and Special Week at camp and warned them that it was going to be sort of strange and dark. I think the results will be more abrasive and dark than they expect. Disabled people tend to get specialized and sentimentalized in pop culture, and that's not the route I was going.

Dalton will attend a book reading and signing July 21 at the headquarters of the St. Louis County Library at 1640 S. Lindbergh Blvd.