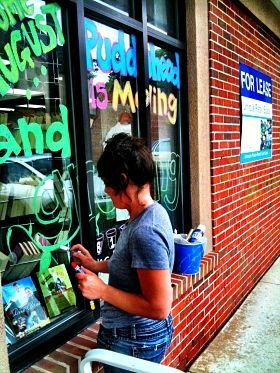 The "For Lease" sign went up outside Pudd'nhead Books yesterday, but don't panic. The Webster Groves bookstore (and reigning Best Independent Bookstore in St. Louis) isn't closing. It's only moving. Starting in August, it'll be taking over 8157 Big Bend Boulevard, nestled between Racanelli's New York Pizzeria and Krueger Pottery Supply, a mere block from its current location in Old Orchard Center.

The new space needs to be refurbished, so owner Nikki Furrer hasn't set an exact moving date; she's aiming for early August. But when that day comes, she plans to enlist her band of loyal customers -- known as "Puddies" -- in a sort of bucket brigade, passing books down Big Bend from the old store to the new. (They'll be rewarded for their efforts with Racanelli's.)

Furrer is excited about the move. "We're moving to a space that's bigger with more storage," she says. "It costs less, so we'll be able to hire a full-time manager, which means we'll have better customer service. I won't be working myself to the bone anymore. Just sort of."

Update, July 18: Barring disaster, Pudd'nhead will be moved by the last weekend in August. The Puddie book brigade, which will transfer the last of the stock between the stores, will assemble on Saturday, August 27, and the store's grand re-opening party will be Sunday, August 28.