Northwest Plaza To Be Auctioned Off This Month 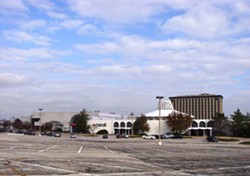 Have you ever dreamed of owning your very own shopping mall? Well, here's your chance.

On July 25 the foreclosed Northwest Plaza shopping center in St. Ann is slated for auction. The sale includes an adjacent ten-story office building that, combined with the mall, adds up to more than 1.8 million square feet of leasable space. Currently just eight percent of the mall is occupied. The office building is 53 percent vacant.

Online auctioneer auction.com will handle the bidding, which is set to begin at 1 p.m July 25 and conclude at 2 p.m. July 27. The property is currently valued at $12 million dollars. And while you could get the mall for a steal at auction, the mall's creditors aren't willing to just give it away. Bidding starts at $1.25 million.

Originally opened in the mid-1960s, Northwest Plaza once boasted of being the biggest shopping mall in the world, with five department stores and 185 smaller stores and vendors. An open-air mall, the center was later enclosed to cater to the changing tastes of shoppers. It didn't work.

By the 1990s the mall had fallen into decline and never recovered. Last year, mall rats from Northwest Plaza's heyday founded a Facebook page to fight off a proposal to turn it into a Walmart development.
__
Keep up on all the latest St. Louis regional news and gossip by following @chadgarrison on Twitter and Daily RFT on Facebook.