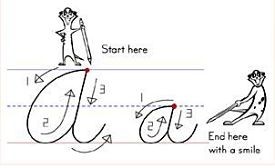 Indiana's department of education recently announced that it will no longer require cursive handwriting to be taught in public schools. This provoked a series of newspaper articles in which the pros and cons of eliminating handwriting instruction were debated and analyzed.

Cons: Young people will no longer be able to read archival material. They will not be able to sign their names. They will write more slowly because when you print, you have to pick up your pen between letters, and that wastes time. Lack of cursive practice will be detrimental to fine-motor skills.

Since 1996, Missouri has not required that elementary school students learn cursive. "The Missouri curriculum calls for 'legible writing,'" says Michele Clark, a spokeswoman for the department of education. In almost every school district, though, that's been interpreted as cursive.

There are no official statistics on how many Missouri students are still learning cursive, Clark says, but based on polls and anecdotal evidence, the department of education believes that it's still being taught in every school district in the state.

"While it may be taught in one grade level and not in subsequent levels, very few teachers say it's not taught in their district at all," says Clark.

There's also been no movement to eliminate cursive altogether, despite the many adults who claim to bear mental scars from spending hours scratching out the same dips and loops over and over again. (Or maybe that's just us.)

"One argument in favor of teaching cursive is that unless you learn it, you'll be unable to read seminal American documents," Clark declares.

Oh, but who cares? They're all available online! Although perhaps future generations would be unable to get the joke of "applying your John Hancock" to a document, and that would be unspeakably sad.

The students of Indiana, meanwhile, will be using all their newfound free time to work on their computer skills.