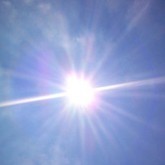 Yes, it's effing hot -- and it's only going to get more hellish as the week goes on. The National Weather Service is predicting highs in St. Louis of 97 today, 99 tomorrow and 101 by Wednesday.

But, hey, it could be worse. In July of 1954 the temperatures hit well into the triple digits for days on end, culminating in a record high temp for St. Louis of 115 degrees. That year, St. Louis experienced 22 days of 100 degree -- or hotter -- temperatures from late June to early September. And that was in a day when many homes did not have air-conditioning!

So, there. Aren't you feeling cooler already?