Did Ryan Theriot Deserve to Be Ejected? 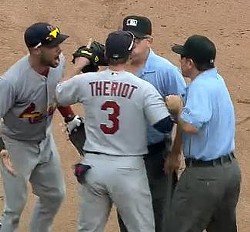 By now you all probably know about last night's ejection of Ryan Theriot after umpire Mike Muchlinski ruled Cincinnati Red Zack Cozart safe at second during a fielder's choice play in the sixth inning. After the ruling, Theriot charged the umpire, George Brett-style, and gave him a piece of his mind, leading to his ejection. Cozart went on to score the tying run.

But regardless of whether Cozart was safe or out (you can decide for yourself by watching the video after the jump), there are two important variables that help make sense of the moment: the phantom tag and the bump.

The phantom tag, of course, is as much a part of baseball as peanuts and Cracker Jack. It's employed by shortstops and second-basemen in the midst of a double play. As you position yourself near second base to receive a throw as the runner slides in with spikes raised, the unwritten rule says it's acceptable to tap the base with your foot and then remove it a few milliseconds before catching the ball -- in order to make a cleaner throw to first base. In last night's case, our guess is that Cozart would've been called out if Theriot had gone through with the throw to first, at least according to phantom-tag precedent.

Now, on to the bump, after the jump.

The Cards' radio announcer declared that Theroit "bumped" Muchlinski. (See clip here.) Watching the replay, it's clear Theriot did jab his hips and pelvis toward the umpire in an attempt to make contact. But was contact made?

It appears that there was a little belly-to-belly grazing. But when we think of a proper umpire bump -- the kind you use when you want to be tossed from the game -- there should be a clear blow to the umpire's chest/rib area, and Theriot's love-tap hardly seems to make the cut. (Oftentimes a true umpire bump is preceded by kicking dirt onto the ump's shoe and turning one's hat around backward so as to get close close enough to his nose to land a bit of spittle on his face.)

Of course, it's also possible that Theriot was ejected not for making contact with Muchlinski, but rather because he used a certain 10-letter word that is a no-no with umpires. (Hint: it rhymes with rock-chucker.)

If you're interested in the proper way to bump an umpire -- and to hear an example of the forbidden word -- observe the master, Crash Davis, below.