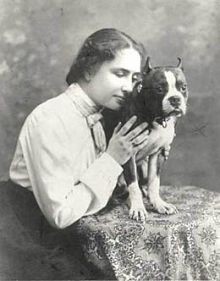 Pitbulls get a bad rap. The things most people think they know about them are pure stereotype, one that alleges a vicious, aggressive demeanor thanks to their history of use in dog fights. The things people don't know about them are considerable: In the early 20th century, they were viewed as a nanny dog. (People let the dogs watch their children!) And a pitbull terrier named Sergeant Stubby became the most decorated dog in all of World War I. We kid you not.

These days, groups like the city's Stray Rescue and the Saint Louis Art University Art Museum are attempting to fight the current of negative sentiments about the breed and replace them with happier ones. The two are partnering for the second annual Urban Wanderers art show, which opens tonight at 6 p.m. and focuses entirely on images of and by pitbulls.

The exhibit, an art auction that will benefit Stray Rescue of St. Louis, is split into art about stray pitbulls, a 108-strong mass of paintings, photography and sculpture, and art made by the animals themselves, a mix that includes both tail-painted canvases and a tree made entirely of chewed-up shoes. The pieces are accompanied by the bios of their creators or those who inspired the work.

"I'll be honest: Some of it is really good," the museum's marketing coordinator, Mary Marshall, says of the canine creations. "With the colors their owners chose for them, they look really abstract and brilliant."

This is the museum's second year partnering with Stray Rescue; a benefit last year with an artistic focus on all stray pups in general raised $25,000. This year's theme narrowed to specifically combat the negative associations of the pitbull.

Stracks, the exhibit's poster pup, was found with his throat slit and bullet holes penetrating his fur. He has since been adopted, but mugs like his will serve as a reminder of the event's ultimate purpose. Stray Rescue's shelter, after all, is currently full.

"It's a pretty permanent misconception that they're an aggressive, vicious breed, but that's nowhere near the truth," Marshall says. "They're just created that way by the people who, well, I don't want to say raise them, because they don't do that. They just mistreat them and don't give them any love."

The auction begins tonight and will end at 11:59 p.m. August 28. In the meantime, the two will team up again for what Marshall calls a "yappy hour," a meeting sponsored by Anheuser-Busch in which patrons and owners can discuss the dogs over drinks. The stories they will discuss come with vastly different endings, but Stray Rescue hopes to change that.

"Some of the stories have happy endings, but a lot of them are heart-wrenching." Marshall says. "You'll see some pictures of a pitbull with no ears because they were either bitten or cut off. It's terrible -- but the good news is that he has been adopted."